Rashid Khan shared a video of this unique shot, which is another variant of MS Dhoni's helicopter shot. 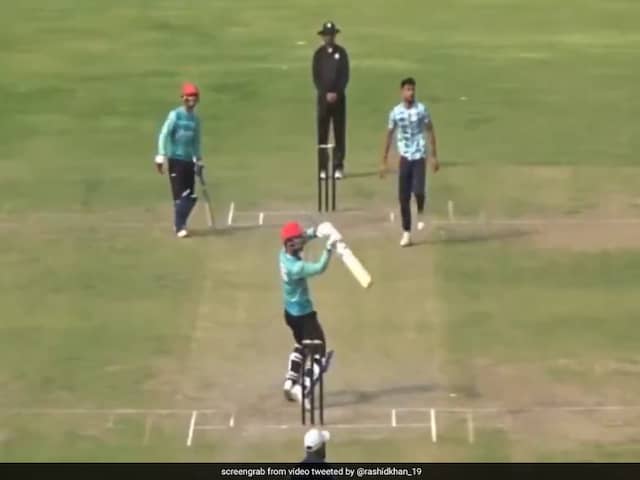 MS Dhoni's helicopter shot is one of the most popular strokes among cricket fans all over the globe. So, every time a player plays attempts something similar, comparisons are bound to happen. On Monday, Afghanistan leg-spinner Rashid Khan posted a video on his various social media handles, including Twitter and Instagram, which shows him playing a unique helicopter shot behind the wickets. Sharing the video, Rashid Khan asked his fans what they thought of his innovative shot and whether they would "call it helicopter shot" or not. "Do you call it helicopter?? I think soo," Rashid captioned the video. Rashid's teammate Hamid Hassan also replied to his post and named his unique shot "ninja cut".

The 21-year-old spinner last played a competitive match for Adelaide Strikers in Australia's Big Bash League (BBL) on February 1, hence it can't be ascertained how old is the video.

A traditional helicopter shot generally goes on the leg side around the mid-wicket and long-on region, but Rashid's shot went over third man fence which led to many people calling it a "reverse helicopter shot".

In the BBL, he played several explosive knocks batting with a unique bat. During a BBL match between Adelaide Strikers and Melbourne Renegades, Rashid flaunted a new bat design which later became popular as "Camel Bat" because it featured a depression on its back.

Afghanistan will host Ireland for a three-match One-day International (ODI) series between March 6 and 10 in Greater Noida.

Afghanistan Rashid Khan Cricket
Get the latest Cricket news, check out the India cricket schedule, Cricket live score . Like us on Facebook or follow us on Twitter for more sports updates. You can also download the NDTV Cricket app for Android or iOS.