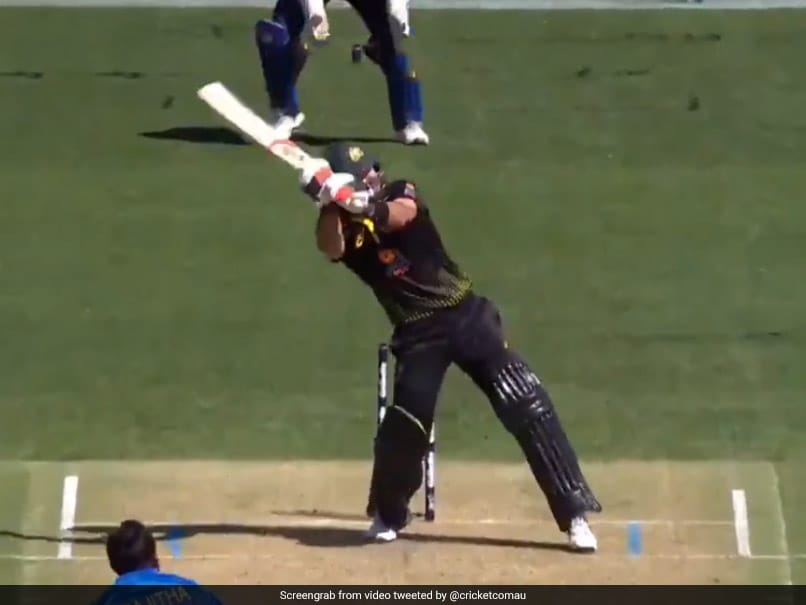 Glenn Maxwell, playing to his reputation, scored 62 off just 28 balls in the first Twenty20 International against Sri Lanka at the Adelaide Oval on Sunday. Maxwell's blistering knock had 10 boundaries, including seven fours and three hits over the fence. Maxwell brought up his half-century in just just 22 balls, when he smashed a six off a full-toss. On the very next ball, Maxwell played MS Dhoni's trademark helicopter shot to perfection to collect six more runs. Sharing the video of Maxwell's sensational shot on Twitter, Cricket Australia wrote: "Maxwell brings out the helicopter! Consecutive sixes for the Australia's No.3!".

Maxwell brings out the helicopter! Consecutive sixes for the Australia's No.3!

While Maxwell played some unbelievable shots during his 28-ball innings, it was opener David Warner who stole the show as he scored his maiden century in T20Is, helping Australia post a mammoth 233/2 in 20 overs.

David Warner, who is Australia's highest run-scorer in T20Is, smashed four sixes and 10 fours, as he entertained the crowd with a range of strokes.

Warner, along with Finch, got off to a cracking start, scoring 57 in the powerplay. The duo carried on the onslaught until Aaron Finch fell for 64, with the score at 122.

Warner was then joined in the middle by Maxwell, who took no time to pick up the momentum, as the two continued to pile on the misery for Sri Lanka. Maxwell smashed 62 off just 28 deliveries as he put up a 107-run stand with the birthday boy, before falling in the final over.

Taking inspiration from their batsmen, Australia bowlers performed as an unit and helped their side register a massive victory.

The second match of the series will be played at The Gabba, Brisbane on October 30.