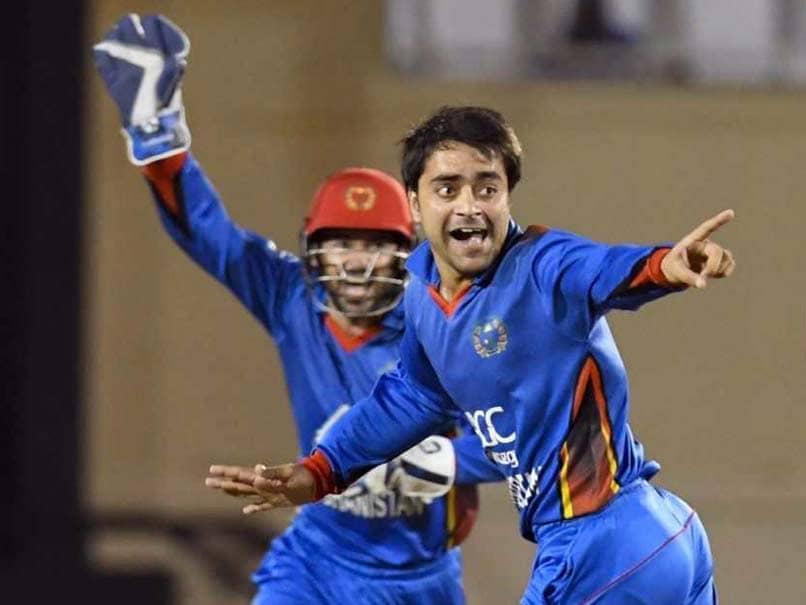 Rashid consolidated his position at the summit in T20I rankings.© AFP

The Afghanistan spin trio of Rashid Khan, Mohammad Nabi and Mujeeb ur Rahman made a remarkable leap in the ICC Twenty-20 International player rankings released on Friday. After playing a crucial part in the 3-0 series defeat of Bangladesh, which concluded on Thursday, premier Afghan spinner Rashid has consolidated his position at the summit after his player of the series effort of 12 wickets, according to an International Cricket Council (ICC) release.

The 19-year-old has gained 54 points to finish with 813 points, 80 more than second-placed Shadab Khan of Pakistan.

Rashid, who was named ICC's Associate Player of the Year for 2017, touched a career-high rating of 816 points after a haul of four for 12 in the second match.

Nabi has also gained 11 spots and reached a career-best eighth rank after taking four wickets and Mujeeb has jumped 62 slots to 51st place in the latest update.

Afghanistan all-rounder Samiullah Shenwari, who top-scored in the series with 118 runs, has gained 11 spots to reach 44th position among batsmen while the Bangladesh batsmen to advance include Mahmudullah (up four places to 33rd) and Mushfiqur Rahim (up three places to 41st).

Among others to improve their rankings are the West Indies' Evin Lewis (up one place to fifth among batsmen), Kesrick Williams (up five spots to 41st among bowlers) and Sri Lanka all-rounder Thisara Perera (up three places to 38th among batsmen).

There has been no change of places in the ICC T20I Team Rankings with Afghanistan and Bangladesh retaining their eighth and 10th positions, respectively.

Pakistan will gain one point with a 2-0 win in that series, finish with 127 points and retain top position with a 1-1 draw but slide to 123 points and third place in case of a 2-0 loss.