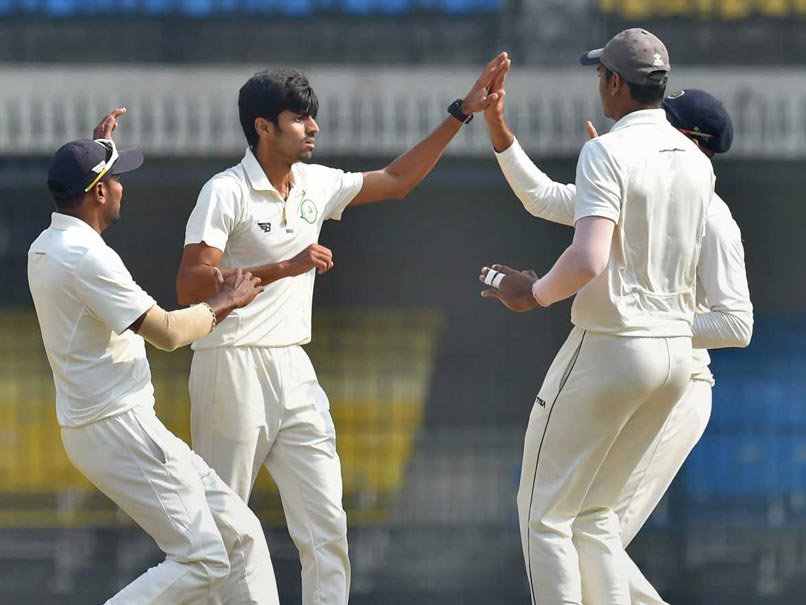 Rajneesh Gurbani of Vidarbha celebrates the fall of a wicket© PTI

Vidarbha crushed Delhi by 9 wickets on Monday to lift their maiden Ranji Trophy at Indore. Chasing a meagre 29 runs, Vidarbha cruised to the target in five overs for the loss of one wicket. Vidarbha displayed a stellar batting performance with powerful knocks by skipper Faiz Fazal (67), Wasim Jaffer (78), AV Wadkar (133), AA Sarwate (79) and SS Neral (74) to ensure they posted a huge 1st innings total. Delhi could only muster 295 and 280 runs in both their batting innings. Dhruv Shorey (145 and 62) and Himmat Singh (66) shone with the bat for Delhi but the lack of support by the other batsmen saw them succumb to a heavy defeat.

Rajneesh Gurbani rattled theDelhi batsmenafter taking 6 wickets for 59 runs in the first innings. Delhi's Navdeep Saini also took a fifer for Delhi after giving away 135 runs but the damage was already done by the Vidarbha batsmen.

Overnight 528 for seven with wicketkeeper Wadkar unbeaten on 133, Delhi quickly picked up the remaining three wickets in the morning. Young pacer Navdeep Saini was the most successful bowler for Delhi, returning figures of 5 for 135 after bowling a marathon 36.3 overs. Delhi were a bowler short through the Vidarbha first innings as left-arm spinner Manan Sharma remained off the field due to a knee injury. Manan, though, batted in the second innings. In their second innings, Delhi were all out for 280 with Shorey scoring another half-century - a 142-ball 62 - while Nitish Rana struck 64.

Trailing by 252 runs, Delhi lost opener Kunal Chandela with just 32 runs on the board. And a bigger blow was dealt on the seven-time winners when their most experienced campaigner, Gautam Gambhir, in what looked like a debatable decision, was adjudged out lbw off Gurbani to a ball that seemed to be heading down the leg side. The out-of-favour India opener looked in good touch during his quick 36 off 37 balls (32 coming in boundaries), and could have helped Delhi's cause had he stayed longer. First-innings centurion Shorey and Rana then added 110 runs for the third wicket. The second session saw Shorey and Rana playing freely, hitting some lovely drives and flicks. However, as the team score reached 164, Delhi lost Shorey, who was given a reprieve by Wasim Jaffer in first slip, to the left-arm spin of Aditya Sarwate.

Rana followed suit as he nicked the impressive Gurbani to Wadkar behind the stumps. Like in the first innings, Gurbani was again bowling his heart out and swung the new ball to good effect. Himmat, who had a fifty in the first essay, was bowled by off-spinner Akshay Wakhare before he could open his account. And then came a reckless shot by skipper Rishabh Pant (32), an attempted heave off Siddhesh Neral leading to his dismissal as Delhi ran out of batting options. This was an over after Pant was let off by Wadkar, who missed an easy stumping chance.