Wasim Jaffer steadied Vidarbha against Delhi with a patient half-century as he remained unbeaten on 61 during the Ranji Trophy final at Indore. 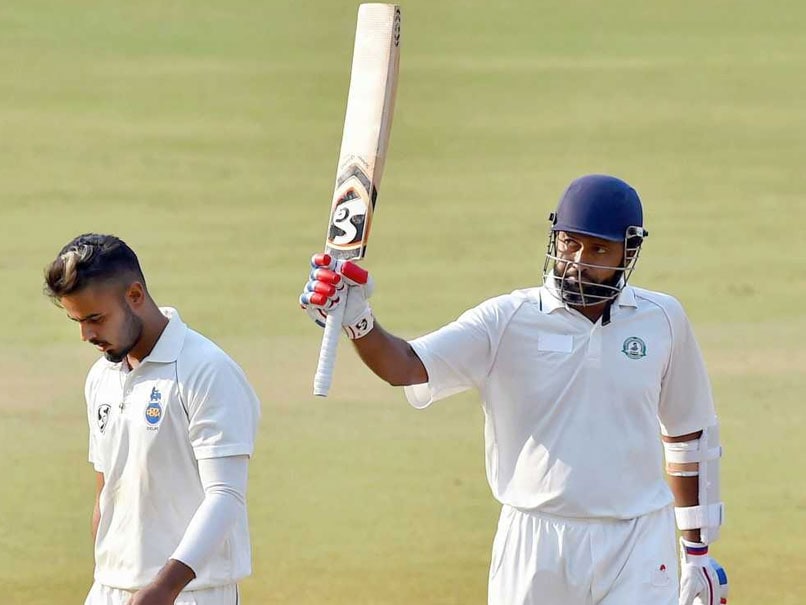 Wasim Jaffer celebrates after scoring his half-century against Delhi.© PTI

Veteran cricketer Wasim Jaffer brought his experience into play as he steadied Vidarbha on the second day of the Ranji Trophy final against Delhi at the Holkar Cricket Stadium at Indore on Saturday. Riding on Jaffer's unbeaten half-century, Vidarbha ended the day at 206 for four after seamer Rajneesh Gurbani went through Delhi's lower-order with a rare hat-trick in the tournament final. At stumps, Jaffer was batting on 61 off 120 balls and Akshay Wakhare was yet to open his account, as Vidabha trailed by 89 runs.

Delhi bowlers' performance during the first hour of the third day could prove to be decisive in the final context of the match.

Resuming on 271 for six, in-form seamer Gurbani (6/59) left seven-time winners Delhi in tatters by removing three batsmen in as many balls on day two. Courtesy his hat-trick, Gurbani became only the second player to claim a hat-trick in the final of India's premier domestic competition.

Tamil Nadu's B Kalyanasundaram was the first, achieving the feat against Mumbai in 1972/73.

On 123 overnight, Shorey laced his innings with 21 boundaries before his team was all out for 295. Delhi lost their last four wickets for only five runs.

A day after a rather subdued outing, Gurbani found his mojo back as the 24-year-old ripped through the shaky defence of Vikas Mishra, Navdeep Saini and Shorey off successive deliveries before knocking over Kulwant Khejroliya, to cut short Delhi's innings.

What made the feat even more commendable was that Gurbani, bowling the hat-trick ball, was up against a batsman who was nearing 150.

Having found the fence on 21 occasions, including four times in the first session of day 2, Shorey was stunned when Gurbani got one to jag back from a shorter length and knock over the top of the off-stump.

Gurbani delivered three more scorchers on either side of Shorey's dismissal, all resulting in the stumps getting knocked over.

Trouble awaited them as Gurbani got one to prodigiously cut back and remove an unmoved Mishra's off-stump with the fifth ball of the 101st over.

Saini, who got stuck to the crease, quickly went back to the dressing room as his stump was also sent flying by another sharp in-cutter.

Vidarbha began their innings in earnest and went to lunch without suffering any damage while scoring 45 runs.

This season's most prolific opening duo of skipper Faiz Fazal (67) and Sanjay Ramaswamy (31) started the second session from where they had left, adding another 51 runs, before Akash Sudan sent Ramaswamy's two stumps flying for the team's first breakthrough.

That brought Jaffer in the middle but, playing in only his second first-class game, Sudan dealt Vidarbha a body blow when the medium pacer had Fazal caught behind after the batsman prodded casually to a delivery that was moving away. He faced 101 balls scoring 10 boundaries.

Prior to that, an unfazed Fazal continued playing his shots and brought up his fifty with a paddle-sweep boundary off left-arm spinner Mishra.

Fazal, the first-time finalists' leading scorer in the season, drove with panache and employed the shots square off the wicket effectively.

Two wickets in the bag, Rishabh Pant brought back his best bet, Saini, into the attack and it paid dividends.

Veteran Ganesh Satish (12), coming off a crucial second-innings half-century in the semi-final against Karnataka, did not last long and was trapped in front of wicket by Saini, a reward for consistently running it hard and pitching it harder.

Jaffer looked solid in the middle and hard as they tried, Delhi could dislodge the seasoned campaigner as an eventful day's play came to an end.

Before that, he entertained the sparse weekend crowd with a few delightful shots - a superb drive past the mid-on, a punch through point and cover drive that had lazy elegance written all over it.

Eight-time Ranji Trophy winner with Mumbai, Jaffer used his wrists to flick Mishra and then glanced him to the third man fence for another boundary.

Delhi kept pressing and were rewarded when tireless left-arm seamer Kulwant Kejroliya induced an edge from Apoorv Wankhade for Pant to complete a comfortable catch.