Quinton de Kock's quick century and Dane Piedt's two quick wickets at the end have put South Africa A  on top against India A in Krishnagiri. 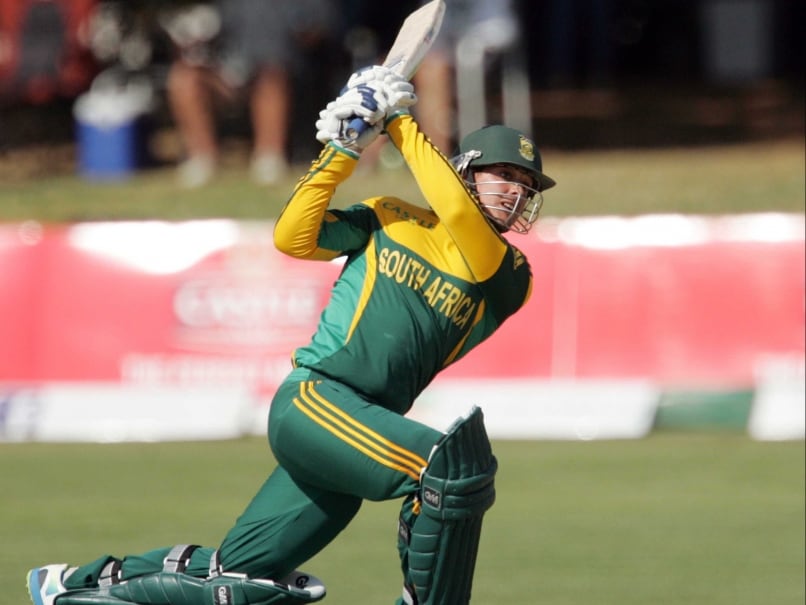 Left-handed batsman Quinton de Kock scored a quick fire century to help South Africa A pile up a massive first innings score of 542 as India A struggled at 122/3 at stumps on the second day of the first four-day cricket match at the Krishnagiri Stadium on Wednesday. (Highlights: India A v South Africa A)

For India A, skipper Ambati Rayudu (11 not out) and (Karun Nair 0 not out) remained unbeaten at the end of the day with a challenging task ahead as the hosts trail by an enormous 420 runs with seven wickets in hand in the first innings. (Ramela Ton Helps South Africa A dominate)

Resuming the day at 293/4, the visitors went on full attacking mode, aiming to mount a big total. Their plan worked perfectly as de Kock struck 113 off just 102 balls alongside skipper Dane Vilas' 74-ball 75 to help the team score 249 runs in just 51 overs on Day 2.

The first day belonged to left-handed middle order batsman Omphile Ramela, who struck 121 to put the visitors in a commanding position at the start. The lower order batsmen responded well on Day 2 with crucial partnerships and handy knocks to put ample pressure on India A.

De Kock and Vilas struck a 107-run partnership for the seventh wicket to take the score close to the 500-run mark. De Kock hit 13 fours and three sixes while Vilas struck 10 fours and two sixes in their century-run stand.

In reply to South Africa's challenging score, India A started their first innings steadily, taking note of the opposition pacers.

Openers Abhinav Mukund (38) and Jiwanjot Singh (22) held on till the 13th over, scoring at a slow pace. But right-arm spinner Dane Piedt got the better of Jiwanjot to clean bowl him, leaving India at 43/1.

Incoming batsman Shreyas Iyer (49) and Mukund looked set to take the score past the 100-run mark but Piedt struck for the second time to get set batsman Mukund out in the same fashion. Iyer, who was looking good, also departed soon, putting the hosts in trouble just before stumps.

Comments
Topics mentioned in this article
Quinton de Kock Wayne Parnell Shreyas Santosh Iyer Cricket
Get the latest updates on India vs Australia Series, check out the India vs Australia Schedule for 2020-21 and Ind vs Aus live score . Like us on Facebook or follow us on Twitter for more sports updates. You can also download the NDTV Cricket app for Android or iOS.