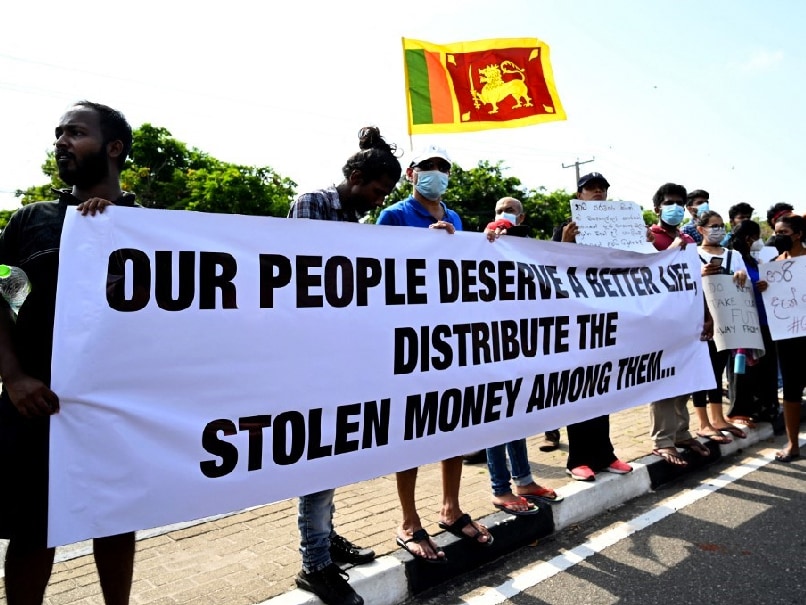 Protestors hold banners and placards during a demonstration in Colombo.© AFP

Former Sri Lanka captain Mahela Jayawardene and current batting star Bhanuka Rajapaksa have expressed their anguish over the ongoing turmoil in the country. Both Jaywardene and Rajapaksa, currently involved in the ongoing IPL 2022, took to Twitter to show solidarity with their countrymen. Sri Lanka is in the grip of an unprecedented shortage of food, fuel and other essentials -- along with record inflation and crippling power cuts with no sign of an end to the economic woes. Crisis-hit Sri Lanka's cabinet resigned en masse from their positions at a late-night meeting Sunday, the education minister said, as anti-government protests escalated despite curfews.

"I'm sad to see emergency law and curfew in Sri Lanka. The government cannot ignore the needs of the people who have every right to protest. Detaining people who do is not acceptable and I am very proud of the brave Sri Lankan lawyers who rushed to their defence," Jayawardene, who is the head coach of IPL team Mumbai Indians, posted on Twitter.

All 26 ministers in the cabinet aside from President Gotabaya Rajapaksa and his elder brother Prime Minister Mahinda Rajapaksa submitted letters of resignation at a late-night meeting on Sunday.

Internet service providers were ordered to block access to social media platforms, including Facebook, WhatsApp, Twitter, but the blackout did not deter several small demonstrations across Sri Lanka. The social media curbs were lifted in the second half of Sunday.

A critical lack of foreign currency has left Sri Lanka struggling to service its ballooning $51-billion foreign debt, with the COVID-19 pandemic torpedoing vital revenue from tourism and remittances.

The South Asian nation is facing severe shortages of food, fuel and other essentials -- along with record inflation and crippling power cuts -- in its most painful downturn since independence from Britain in 1948. Sri Lanka is negotiating with the International Monetary Fund for a bailout.