The ICC announced that rain on Friday not only affected the Pakistan vs Sri Lanka 1st ODI but also the second match that was scheduled to be held on Sunday. 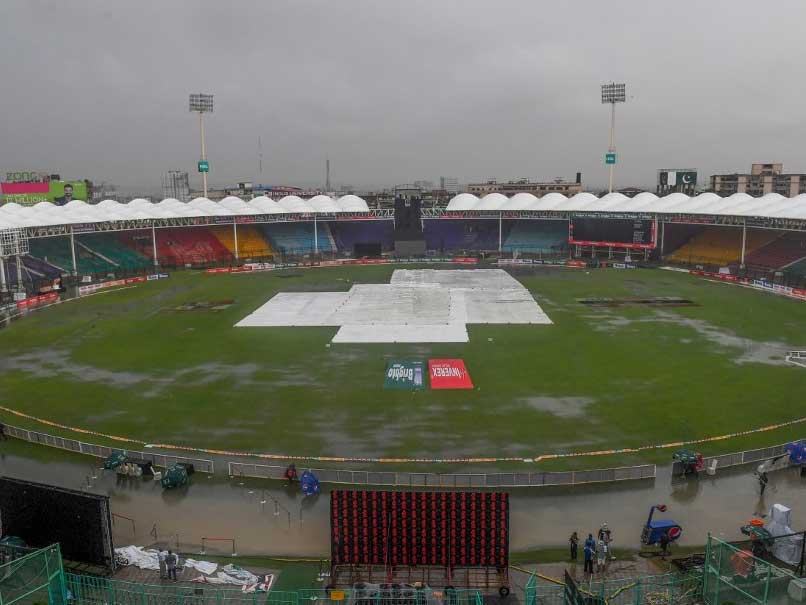 Pakistan vs Sri Lanka 1st ODI on Friday was called off without a ball being bowled.© AFP

The Pakistan vs Sri Lanka first ODI on Friday was washed out without a ball being bowled at the National Stadium in Karachi. It was a disappointing return for cricket in what was slated to be the first ODI played on a Karachi pitch in a decade. Heavy showers began as soon the two teams were whisked into the National Stadium under tight security in the afternoon. Late on Friday, the International Cricket Council (ICC) announced that the rain not only affected the match on Friday but also the second ODI that was scheduled to be held at the same venue on Sunday. Cricket's world governing body stated that the second ODI had been pushed back by a day and will now be playing on Monday (September 30).

The ICC's Twitter handle came up with hilarious tweet to announce the latest development, asking fans if they had "ever heard of rain so heavy it washes out a game two days away?!".

The second ODI between Pakistan and Sri Lanka at Karachi has been rescheduled from Sunday 29 September to Monday 30 September due to the rain which washed out the first ODI.

Have you ever heard of rain so heavy it washes out a game two days away?!https://t.co/ZTIhgcJc1O

The Pakistan Cricket Board (PCB), in a media release, confirmed that the decision has been made in consultation with Sri Lanka Cricket (SLC).

"The decision has been made in order to allow the groundstaff to prepare the Karachi National Stadium's outfield for next week's play, as heavy rains experienced during this week have left the outfield soggy," a statement said.

"This week's unseasonal heavy rains have forced us to review the series schedule. I am thankful to Sri Lanka Cricket as well as our host broadcasters for agreeing to amend the match schedule to ensure there are no further abandonments due to rain in what is an important bilateral FTP series for Pakistan," Zakir Khan, PCB Director - International Cricket, was quoted as saying in the release.

Karachi will also be hosting the final ODI on the tour, while the two teams will play three Twenty20 internationals in Lahore next month.

The latest series is an attempt by Pakistan Cricket Board to bring international cricket back into the country following the 2009 attacks.

Zimbabwe were the first team to tour in Pakistan for six years when they played two Twenty20s and three one-day internationals in Lahore in 2015.

That was followed by a World XI tour and home T20 matches against Sri Lanka and the West Indies.

For the current tour, Pakistan have put in place stringent security measures normally reserved for heads of state.

Sri Lanka Cricket Team Pakistan Cricket Board International Cricket Council Cricket
Get the latest updates on Olympics 2020, Olympics 2020 Medal Tally , Live Cricket Score . Like us on Facebook or follow us on Twitter for more sports updates. You can also download the NDTV Cricket app for Android or iOS.