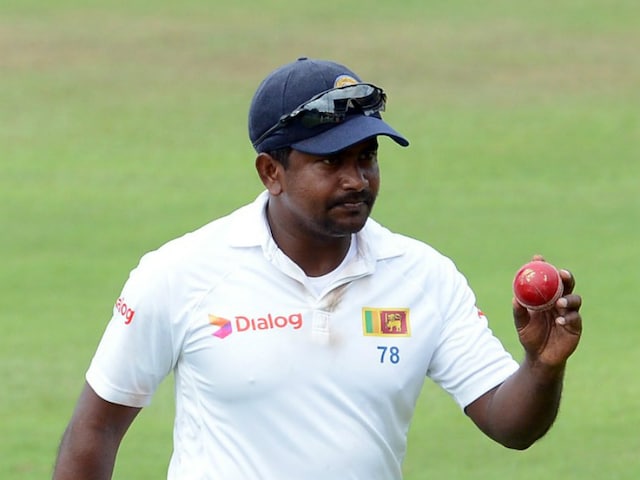 Wily left-arm spinner Rangana Herath was left delighted as he joined the 400-wicket club with a six-wicket haul that helped Sri Lanka to a narrow 21-run win over Pakistan in Abu Dhabi on Monday. The 39-year-old finished with 6-43 -- 11-136 in the match -- to help Sri Lanka dismiss Pakistan for 114 after they were set a target of 136 to win on the fifth and final day at Sheikh Zayed Stadium.

Herath's dismissal of last batsman Mohammad Abbas was his 400th wicket in his 84th Test, becoming the 14th most successful bowler and fifth spinner in the five-day format to reach the milestone.

Herath was delighted at reaching the milestone.

"I'm so happy with the remarkable achievement of 400 wickets," said Herath after the match. "All credit should go to the people behind me, from my parents to the team and the supporting staff."

Herath, who took 5-93 in Pakistan's first innings of 422, admitted there was help from the pitch on which 16 wickets fell on the last day.

"There was some assistance from the surface. There was something for the spinners so I got this success," he said.

Herath took 23 wickets against Pakistan in 2014 -- a world record in a two-match series, and he said he had no clue why he was continually so successful against the nation.

He is the second Sri Lankan to take 400 or more wickets behind Muttiah Muralitharan who is the highest wicket taker in all Test cricket with 800.

The second Test -- a day night affair -- will start in Dubai from Friday.

Comments
Topics mentioned in this article
Sri Lanka Cricket Team Pakistan Cricket Team Cricket Rangana Herath
Get the latest Cricket news, check out the India cricket schedule, Cricket live score . Like us on Facebook or follow us on Twitter for more sports updates. You can also download the NDTV Cricket app for Android or iOS.