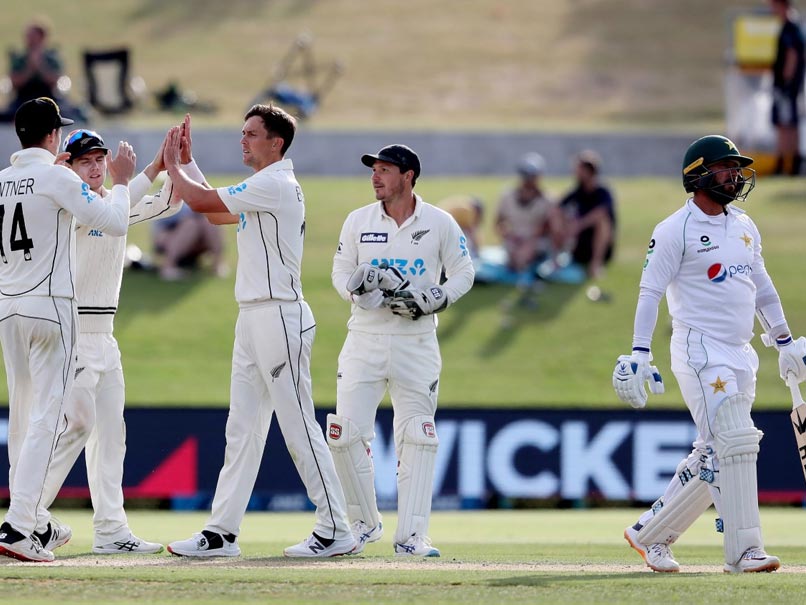 Trent Boult picked up 2/71 as Pakistan were bowled out for 239 in their 1st innings of 1st Test.© AFP

Not even a broken toe could stop New Zealand's pace attack dominating day three of the first Test against Pakistan Monday, but their efforts to quickly wrap up the innings were slowed by Mohammad Rizwan and Faheem Ashraf's late century stand. As intermittent showers and an unseasonal hail storm disrupted proceedings at Mount Maunganui, the Black Caps' pace foursome took five for 50 in the first two sessions before Pakistan rallied to be all out for 239 at stumps, still 192 in arrears.

Rizwan and Ashraf provided a face-saving partnership for Pakistan with 107 for the seventh wicket before Rizwan was run out for 71 by Mitchell Santner's smart underarm throw from square leg.

Ashraf soldiered on to a career-best 91 before he was the last wicket to fall.

Kyle Jamieson returned the best figures for New Zealand with three for 35, while Neil Wagner ignored the pain from a broken toe to charge in for 21 overs to take two for 50.

He hobbled off at stumps describing it as one of the toughest days of his career and revealed he needed pain killers to keep going.

"After the first rain break I just went 'dammit I can't bear the pain' and I got a jab and that took the pain away a little bit... but it started wearing off pretty quickly," said Wagner, who broke a toe on his right foot when batting on day two.

"Injuries happen and it's unlucky but I can still do things and run and it's not going to stop me. It's sore and it's bloody uncomfortable but its just one of those things you've got to deal with and I still felt that I didn't want to let my teammates down."

New Zealand need to win both Tests against Pakistan to be in with a chance to make the World Test Championship final in June, and Pakistan batting coach Younis Khan said that would put added pressure on the Black Caps going into their second innings on Tuesday.

"If New Zealand want to win this Test match they should do some brave decisions so we are expecting there will be an early declaration and we are ready for that," Khan said.

When Pakistan resumed the day at 30 for one, Abid Ali and nightwatchman Mohammad Abbas put on just nine runs in 74 balls while Wagner was kept out of the early attack.

The partnership was broken by Jamieson who hurt Abid Ali with the last ball of his first over which smacked into the batsman's fingers.

Two balls into Jamieson's next over Abid kept his hands out of the way from a ball wide of off stump, only to see it jag back and he was bowled for 25.

In the following over Trent Boult, who had troubled Abbas with a succession of short balls, found an edge with a full delivery and Ross Taylor held the catch at first slip.

Azhar Ali and Haris Sohail stayed together for 50 deliveries but contributed only nine runs before both went in one Tim Southee over.

Wagner tested his foot with three overs before lunch and continued with a seven-over spell after the break, during which he took the only wicket to fall in the middle session with a trademark bouncer that Fawad Alam edged to wicketkeeper BJ Watling.

The nine-run knock continued a run of low scores for Alam who has adopted an unusual side-on stance that suggests he is expecting the ball to come from square leg -- even more exaggerated than that of West Indies great Shivnarine Chanderpaul.

Jamieson had the remarkable figures of two for nine off 17 overs at Tea but as the Rizwan-Ashraf partnership took its toll he ended the day with three for 35 off 23.1 overs.

Along with Wagner's pair, Southee finished with two for 69 and Boult took two for 71.

Pakistan Cricket Team Faheem Ashraf Mohammad Rizwan Neil Wagner New Zealand vs Pakistan, 1st Test Cricket
Get the latest updates on T20 World Cup, check out the T20 World Cup Schedule and Live Score . Like us on Facebook or follow us on Twitter for more sports updates. You can also download the NDTV Cricket app for Android or iOS.