Marcus Stoinis' unbeaten 146 went in vain as New Zealand clinched the first ODI of the series by 6 runs against Australia in Auckland on Sunday. 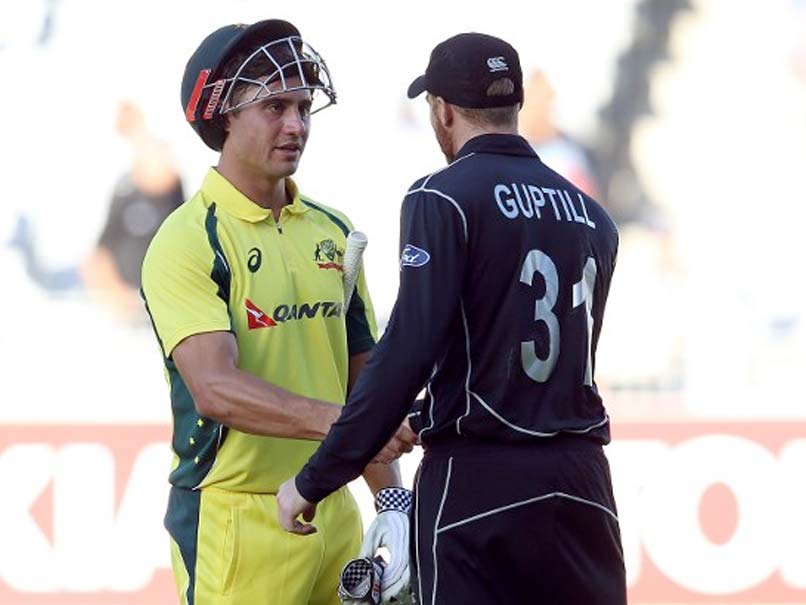 New Zealand scraped home in the first one-dayer against Australia on Monday, but only after rookie all-rounder Marcus Stoinisfell agonisingly short of dragging his team to victory with an unbeaten 146. In just his second One Day International(ODI), Stoinis took three wickets then flayed the New Zealand attack as the Australians chased a target of 287 runs at Auckland's Eden Park. He came to the crease with Australia reeling at 54 for five and calmly set about rebuilding after his more experienced teammates had squandered their wickets.

His 146 was a record ODI score for an Australian number seven batsman and included 11 sixes and nine fours.

Remarkably, the 27-year-old's last partnership with Josh Hazlewood was worth 54, but Hazlewood did not face a single ball as Stoinis stayed on strike trying to guide Australia home.

His heroics prevented a trouncing in the opening match of the Chappell-Hadlee Trophy, sparing Australia's blushes after they rested their star batsmen for the series.

The tourists left David Warner and Usman Khawaja out of the squad to protect them for the upcoming Test series in India, then lost captain Steve Smith and wicketkeeper-batsman Matthew Wade to injury.

But the players expected to offer leadership in their absence failed to step up and the Australians crumbled before Stoinis arrived.

Their woes were largely caused by rash or careless shots, not demons in a pitch on which the New Zealanders had batted solidly.

Relative newcomers such as Travis Head (5) and Peter Handscomb (4) could be forgiven for a rush of blood to the head at the sight of the short Eden Park boundaries.

However, stand-in captain Aaron Finch (4), Shaun Marsh (16) and Glenn Maxwell (20) -- all with 50-plus ODIs -- are likely to face tough questions over the performance.

Boult dismissed Head and Finch in the fourth over, with the acting skipper falling to an acrobatic Jimmy Neesham catch trying to pull past square leg.

Marsh went after a lazy dab at Mitchell Santner's spin and Maxwell tried to collar rookie speedster Lockie Ferguson, only to nick the ball to the wicket keeper.

- Stranded at the crease -

Stoinis grafted an 81-run seventh wicket partnership with James Faulkner (25), then added another 52 to Australia's total with Pat Cummins.

He smashed three sixes off one Jimmy Neesham over, then blasted another off Boult to bring up his century off 96 balls.

Australia looked on the verge of an unlikely victory, needing just seven runs off three overs, before a mix-up saw Hazlewood run out and Stoinis stranded at the crease.

Finch, missing his star scorers, elected to bowl after winning the toss.

It paid early dividends as New Zealand struggled, with nerves appearing to get the better of some Black Caps as they sought to avenge a 3-0 whitewash to Australia last December.

But veteran Neil Groom's 73, combined with 61 from Guptill and 48 from Neesham, proved enough for a narrow win.

The second ODI will be in Napier on Thursday, with the third in Hamilton on Sunday.

Comments
Topics mentioned in this article
New Zealand Cricket Team Australia Cricket Team Steven Smith Matthew Wade Aaron Finch David Warner Eden Park, Auckland Cricket Martin Guptill
Get the latest updates on India vs South Africa and check out  Schedule, Results and Live Score. Like us on Facebook or follow us on Twitter for more sports updates. You can also download the NDTV Cricket app for Android or iOS.