Crucial half-centuries from both Man of the Match Marcus Stoinis and Wriddhiman Saha helped Kings XI Punjab to seal their third win of the season in nine matches. 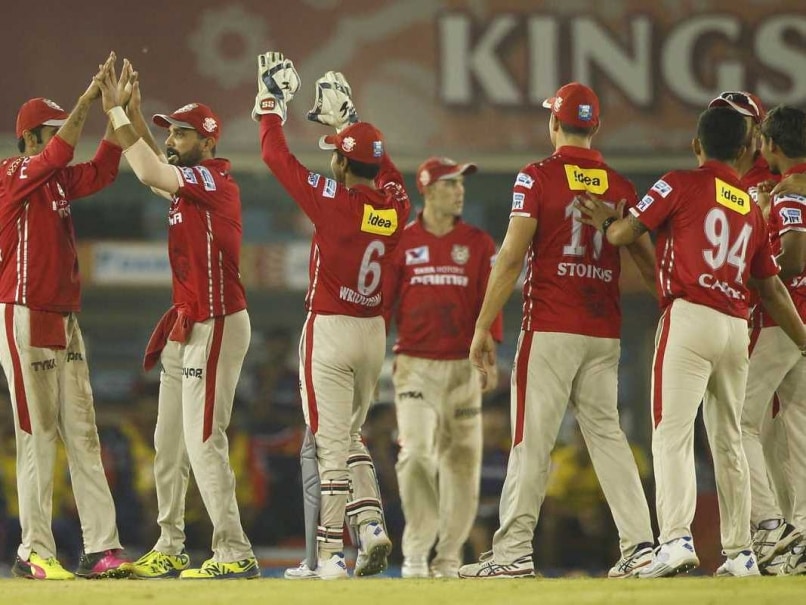 Defending a target of 181, Kings XI Punjab restrictedDaredevils to 172 for 5 even as the Zaheer Khan led outfit looked set to get 44 off 4 overs, which was considered par for the course on a flat batting wicket.

While KXIP's third win does not change their position in the league table but certainly keeps them alive while Daredevils will rue a missed opportunity even though they stay put at third place in the table.

The hero for KXIP would be Mohit Sharma (0/21 in 4 overs) who did not get any wickets but should unbelievable variations to bowl 12 dot balls equivalent two maiden overs.

The 17th over bowled by Marcus Stoinis (3/40 in 4 overs) was an eventful one that saw the right-arm gentle medium pacer give only 4 runs gettimg Sam Billings (6) in the process.

In the last three overs, Daredevils needed 40 from last 3 overs.

Carlos Brathwaite (12) hit a four and a six off Sandeep Sharma before providing a simple catch for the fielder stationed at mid-wicket boundary trying a pull shot.

With 29 needed off 13 balls, the match seemed like slipping out of Daredevils' hands. Mohit Sharma compounded their woes bowling a brilliant 19th over giving away only three runs as KXIP pocketed the match in that very over.

Sandeep then kept his cool in the final over where 25 was needed and he gave only 15 runs.

De Kock was watchful for the first few deliveries before hitting his first boundary off spinner KC Cariappa, sweeping him to the square leg boundary. In the next over, he smashed Mohit Sharma over extra cover for another boundary.

When Stoinis was introduced into the attack, De Kock was quick to cut him and then drove him through the covers for back to back to boundaries.

Axar Patel was slog swept over backward square leg for a six followed by a boundary through the covers.

The 50 runs came in the final over of Powerplay as Sanju Samson smartly nudged around for the singles to give De Kock the bulk of the strike.

He used the sweep and cut shot to good effect against the spinners -- Cariappa and Patel to hit them for boundaries.

De Kock's own 50 came off 28 balls with a lustily pulled six off Stoinis. But he did not last long after that as he tried to slash a Stoinis slower only to be caught at backward point. De Kock's 52 off 30 balls had six boundaries and two sixes as the opening stand yielded 70 runs.

Once De Kock was out, Samson gave Cariappa the charge hitting him for a big six followed by a boundary. The came in the 12th over.

In the 14th over, Samson picked up Stoinis to pull him and then hit him thriough vacant extra cover to reach 49 before indiscretion cost him his wicket.

He tried to hit Stoinis for a six after the two boundaries only to be caught by Glenn Maxwell at long-on. Samson's 49 off 35 balls had four boundaries and a six.

The Samson-Karun duo added 51 runs for the second wicket as another 61 runs were required for victory.

Karun Nair (23) simply did not get going and David Miller having dropped him once, did not make the same mistake second time round when KC Cariappa's bowling. Karun and Samson's dismissals due to poor shot selections was the biggest reason for Daredevils faltering in chase.

Wriddhiman's 33-ball-52 which comprised seven boundaries was well-complemented by a 44-ball-52 from Marcus Stoinis after Zaheer Khan put the home team into bat.

The Test specialist, who has had uneventful IPL since the start of the 2015 edition finally got a score of significance after 19 innings. Incidentally, it was his first 50 plus score after his century in the 2014 IPL final.

There were two significant partnerships in the KXIP innings. 58 for the third wicket between Stoinis and Wriddhiman while the Bengal stumper also enjoyed a quickfire 46-run stand in 4.1 overs with Glenn Maxwell (16).

The last 6 overs produced 75 runs for the Kings XI Punjab who posted their highest team total of season-9 so far.

Murali Vijay (25, 16 balls) started with a flurry of boundaries as he was in a mood to punish Morris, who finally got his revenge when KXIP skipper's short arm pull was brilliantly snapped by Carlos Brathwaite standing at mid-wicket.

Hashim Amla (1) and Stoinis during their short and uneventful stay at the wicket could have got run-out on three occasions. Finally, Amla was indeed run-out as he failed to return to his crease bringing Wriddhiman in.

Wriddhiman started with a square cut off Mohammed Shami while Stoinis lofted Nadeem for a big straight six. The second six that the Aussie hit was off a slower delivery from Brathwaite.

But his joy was shortlived as skipper Zaheer removed him when he was holed out at the long-on by Sanju Samson for 53 off 44 balls.

Once, Stoinis was out, Wriddhiman took it upon himself to accelerate the scoring. He hit Mishra inside out and then pulled him for good measure.

But standout was the 16th over where he hit Zaheer for three boundaries in the onside. A couple of pull-shots and a one behind the square.

The 50 came off 29 balls when he cover drove Morris for a double.

Such was Wriddhiman's domination that the normally pugnacious Glenn Maxwell decided to play the second fiddle.