MS Dhoni, who maintains a low-profile, on Tuesday made an appearance on social media, courtesy her wife's Instagram post 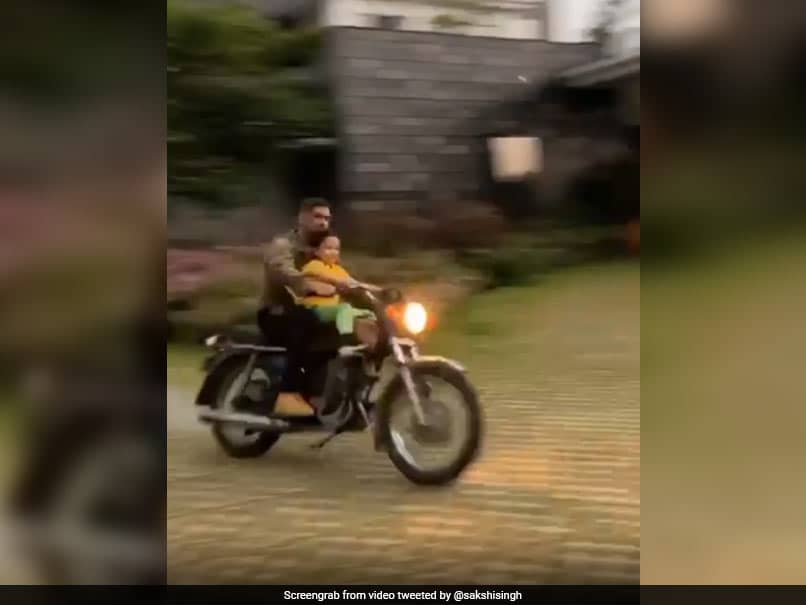 MS Dhoni stole the show as he rode his bike, with daughter Ziva sitting in front.© Instagram

MS Dhoni, who maintains a low-profile on social media, on Tuesday made an appearance on Instagram, courtesy a video shared by his wife Sakshi. In the video, while Sakshi was trying to spot thunder and lightning amidst the pleasant weather, it was the former India skipper who captured the limelight as he rode his bike, making their daughter Ziva sit in front. Sakshi posted the over 10-minute-long video where she is walking in garden at their farm house, enjoying the pleasant weather in Ranchi. "Weather," Sakshi's caption the video.

In the video, Sakshi can be heard explaining her daughter why she thinks it won't rain despite heavy clouds.

Sakshi also reveals that when she was a kid she used to be very scared of thunder and lightning.

To which Ziva replies: "I am not scared of lightning at all".

Sakshi, on Sunday during an Instagram live session on Chennai Super Kings (CSK) handle, spoke at length about various things related to her husband. She also revealed how she met him for the first time and what was his first impression of the star wicket-keeper batsman.

Spilling the beans, during the interaction, Sakshi revealed MS Dhoni's worst hairstyle and said that she was lucky to have not met him during his long hair days. She also said that had she met him back then she "wouldn't even have looked at him".

"Luckily I didn't see him with long hair. Because if I had seen him with that oranged-long hair I wouldn't have even looked at him you know there has to be some aesthetics you know," Sakshi said without hesitation.