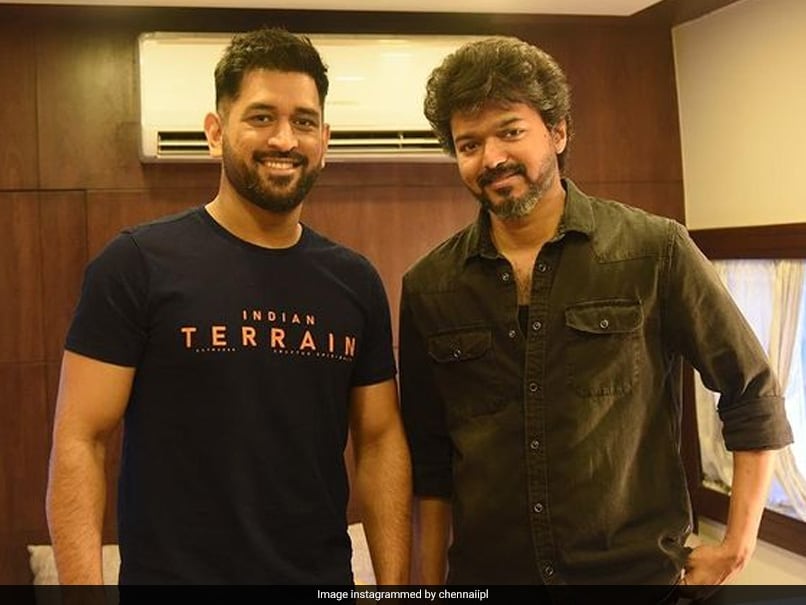 Former India captain MS Dhoni and actor Vijay recently met in Chennai. Both were at a studio for their respective shooting schedules. The Instagram account of the Indian Premier League (IPL) team Chennai Super Kings (CSK) shared an image of the two highly popular celebrities together. "Master and the blaster," CSK captioned the post. While Vijay's movie Master received a blockbuster opening in January this year, Dhoni is lovingly called the "blaster" by his fans because of his cracking shots with the bat.

The caption of the Instagram post, which has received more than 4 lakh likes in an hour, also appeared to a play on the song 'Master the Blaster' featuring Vijay from the movie. The Tamil star was shooting for his next movie 'Beast' when Dhoni ran into him.

Like Vijay, Dhoni enjoys a massive following and is highly admired as CSK captain in Tamil Nadu. The cricketer's fans call him "Thala", meaning leader in Tamil. And Vijay is called "Thalapathy", which also means leader or commander.

Vijay was also the brand ambassador of CSK in 2008. Seeing the "leaders" of cricket and cinema together, their fans went into a frenzy and showered praise on their "Thala" and "Thalapathy".

"Picture of the year," said one user.

Another user said, "Two lions meeting each other."

Several images of Dhoni and Vijay were shared on Twitter as well. Check some of them below.

No one can match the Craze of this two Men #MSDhoni #ThalapathyVijay pic.twitter.com/OKz3OqDPfE

#ThalaDhoni has walked straight into the #Beast set after knowing #ThalapathyVijay is shooting nearby for his new film!

The CAMRADERIE between them pic.twitter.com/jJAiAc8TKt

Dhoni is set to leave for the UAE later this month to participate in the remaining part of the IPL that was suspended in India in May due to the pandemic. Meanwhile, Vijay is working on 'Beast', in which he stars opposite Pooja Hegde.

MS Dhoni IPL 2021 Cricket
Get the latest updates on IND vs NZ 2021, check out the Schedule and Live Score . Like us on Facebook or follow us on Twitter for more sports updates. You can also download the NDTV Cricket app for Android or iOS.