MS Dhoni's daughter Ziva seems to be having the time of her life during the vacation with her parents. 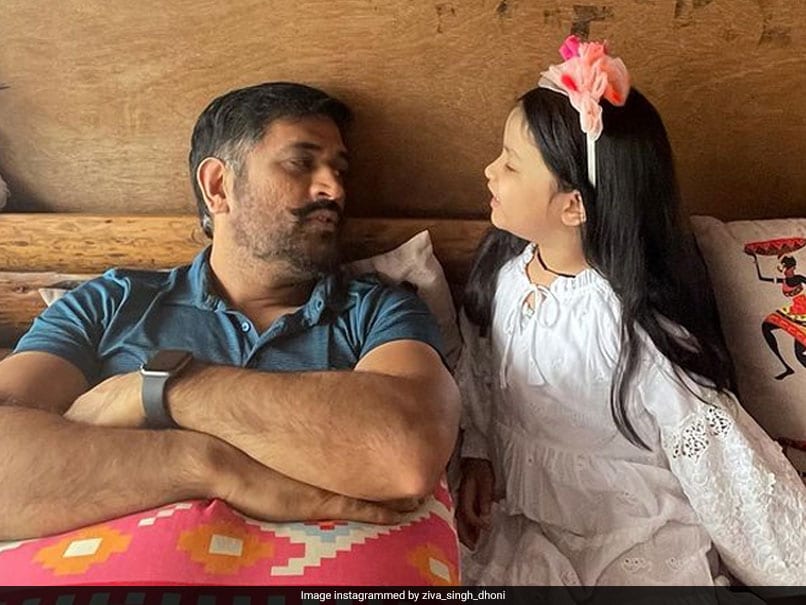 MS Dhoni was captured playing with his daughter Ziva during their vacation.© Instagram

Chennai Super Kings (CSK) skipper Mahendra Singh Dhoniis enjoying a calm vacation with his daughter Ziva and wife Sakshi in the mountains. Even though the former India skipper does not use social media much, fans of MSD often get a glimpse of his whereabouts from his daughter and wife's Instagram profiles. On Tuesday, the official Instagram page of Ziva once again gave fans a sneak peek into Dhoni's life. The latest post on Ziva's account consists of several pictures of her enjoying in the hills. One photograph also features her dad Dhoni.

In another post, this time a video clip, Ziva is petting a black dog while enjoying the scenic view.

Another post has the adorable father-daughter duo looking at the camera. While Dhoni has a smile on his face, Ziva is seen standing next to her father, hugging his legs.

In a fourth post, Ziva is seen standing on a balcony, possibly of their homestay in the hills.

Dhoni was last seen in action during the 14th edition of the Indian Premier League (IPL) earlier this year. CSK were placed at the second spot on the points table when the tournament was suspended due to a surge in COVID-19 cases in the country as well as within the IPL bio-bubble.

The second leg of the marquee event is slated to be held between September and October in the United Arab Emirates (UAE).

Dhoni bid adieu to international cricket on August 15, 2020, by sharing a video of himself in Indian colours on Instagram. While thanking everyone for their "love and support throughout", he wrote, "From 1929 hrs consider me as retired".