Kiwis with venom in their pace

Chris Martin, who claimed career-best figures of 6 for 26 against Zimbabwe in Napier, has said New Zealand's success in the Test had much to do with a four-pronged pace attack. 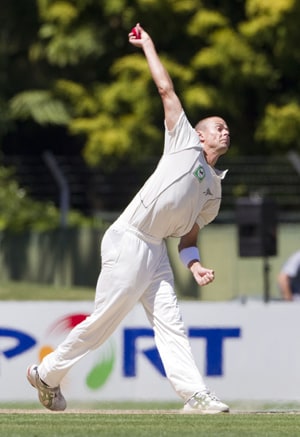 Chris Martin, who claimed career-best figures of 6 for 26 against Zimbabwe in Napier, has said New Zealand's success in the Test had much to do with a four-pronged pace attack. New Zealand's bowlers combined to bowl Zimbabwe out twice on the same day - only the third such instance in history - propelling the hosts to an innings and 301-run victory.

"It was [overwhelming for Zimbabwe] I think ... four [fast] guys with the ball, they all do something a little bit different. We don't probably get over-bowled, so there's a little bit of venom in every spell." New Zealand played four quicks in the match, with Trent Boult, Doug Bracewell and Tim Southee partnering Martin. In Zimbabwe's first innings, each of the four fast bowlers picked up two wickets apiece to skittle the visitors for 51, while in the second Martin and Bracewell polished them off.

"The pitch actually quickened up a wee bit over the course of the match. I'm definitely more of a bounce bowler, so I enjoyed the bounce and pace in it. Dougie just swings the ball very nicely to the right-handers, and is always going to be a threat. I think Boulty and Timmy were hungry, and definitely wanted the ball the whole day. So we were all competing for it, and it's nice to get a win out of that kind of competitiveness within the bowling ranks."

With Daniel Vettori filling the spinner's role, the New Zealand line-up comprised only five frontline batsmen, plus wicketkeeper BJ Watling. However, with some of the bowlers' ability to contribute with the bat as well, the line-up isn't unstable, Martin said. "I like to see it [five bowlers playing] happening. I think the ability of Doug and Timmy with the bat is going to get better and better, and with Dan batting at six - he's out there to score runs every time he plays, he probably averages about 40 [with the bat] over the past five years - I think we're going to have some success."

Martin's eight wickets in the match took him level with Chris Cairns on the list of New Zealand's top wicket-takers. With 218, Martin is joint-third, behind Richard Hadlee and Vettori. "I had him [Cairns] on the radar, but perhaps not at the start of the day," Martin said. "I'm stoked to have got that far, and hopefully I push on past him."

Tweaking his run-up has helped him be more effective, Martin said. "I tinkered with something last summer, just to get my stride patterns right with my run-up, so I wasn't over-striding. Now I'm cruising in a little bit more, the angle with which I'm bowling now is helping me swing the ball more."

After the limited-overs series against Zimbabwe, New Zealand will face stronger opposition in South Africa and, according to Martin, they are up for the challenge. "I think the consistency with which we have attacked that off-stump line, with a little bit of movement, and the way we have drawn them [batsmen] into playing shots that perhaps they didn't want to, I think against any side that is always going to be competitive.

"The slip catching has been out of this world. I don't think I have seen a better one than the one Dean Brownlie took today. All of those things we may have to do for longer periods against South Africa, but they definitely bode well for the ability of our boys to remain composed and get the results, which is something we have carried on from Hobart."