Aakash Chopra shared a video of a kid swinging the cricket bat with aplomb and hitting the ball a long way. 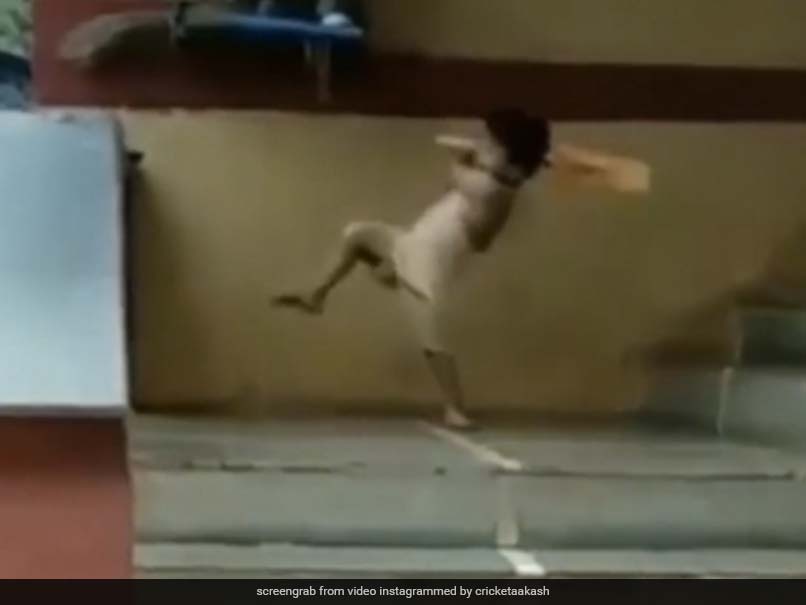 Former India cricketer Aakash Chopra took to Instagram to share a video of a kid playing phenomenal cricket shots. The former cricketer-turned-commentator was amazed to see by how powerfully the kid was hitting the ball, sending it to a long distance. Praising the kids' talent, the former India opener wrote: "How good is this young kid!!!". The video shows a left-handed kid standing on the staircase waiting for the ball to be bowled. Standing with an open stance, the kid is ready to free arms. And as soon as the ball arrives, the child shows no mercy and hits it very far.

The video became an instant hit among the fans, while people praising child's excellent bat swing. A user even likened the power-hitting to the Kings XI Punjab's Chris Gayle, while the other was reminded of the six sixes that Yuvraj Singh had hit off Stuart Broad in the inaugural World T20 in 2007.

"The bat swing is outstanding," wrote one user, while the other commented: "Junior Chris Gayle".

"This reminds of the 6s hit by Yuvraj Singh to Broad. All over the park 360 degree shots," said one user.

Aakash Chopra, who is very active on social media, has shared such videos of young kids playing beautiful cricket shots in the past as well. Instead of sharing the raw videos, the former Delhi player adds his commentary to such clips, making them more interesting for the viewers.

With IPL just days away from now, Akash Chopra believes that UAE wickets might suit the Royal Challengers Bangalore (RCB) most among all the teams.

"RCB does not have a strong bowling attack, in the last season they just won three matches at their home ground, they have a limited bowling attack but it can come good in the UAE as there are big grounds. So, I really think RCB can be one of the big beneficiaries with the IPL taking place abroad. Yuzvendra Chahal and Pawan Negi will have a big role to play in the UAE," he had said in a video posted on his official YouTube channel.

The IPL 2020 starts with a repeat of last year's summit clash between Mumbai Indians and CSK on September 19, while RCB, eyeing their maiden IPL title, will start their campaign against 2016 champions SunRisers Hyderabad (SRH) in Dubai on September 21.

Comments
Topics mentioned in this article
Aakash Chopra Cricket
Get the latest updates on Olympics 2020, Olympics 2020 Medal Tally , Live Cricket Score . Like us on Facebook or follow us on Twitter for more sports updates. You can also download the NDTV Cricket app for Android or iOS.