This is not the first time that a swarm of bees halted a game of cricket. 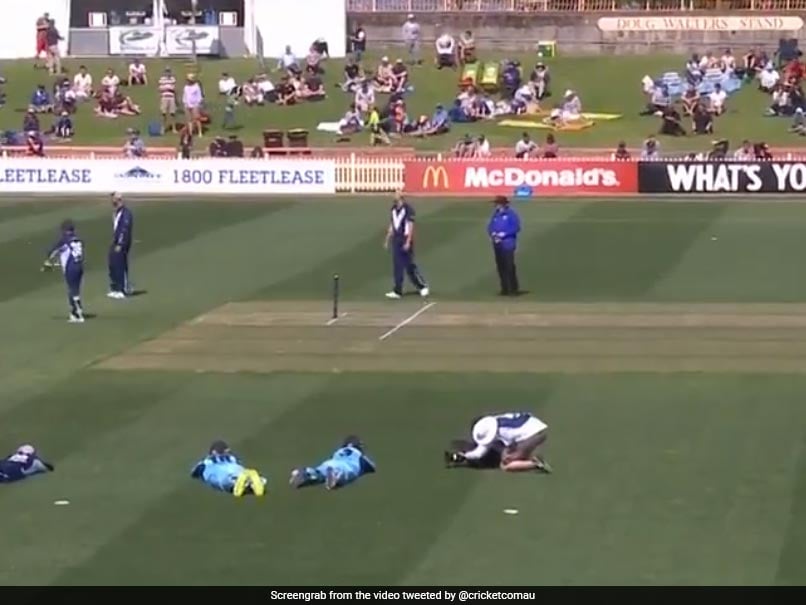 Players lay on the ground to protect themselves from the bees.© Twitter

Victoria, riding on a fine hundred by Cameron White and a brilliant bowling spell by Jackson Coleman (5/39), beat New South Wales by 66 runs in the ongoing JLT One-Day Cup, Australia's domestic One-Day competition. However, it was not White or Coleman, who hogged the limelight but a swarm of bees that halted the game. The official Twitter handle of Cricket Australia uploaded a video of the whole incident and captioned it "It's almost hard to beelieve play between NSW and Victoria was delayed for a few minutes because of this."

In the video, while some players can be seen lying down on the ground with their head down, few of them were standing, trying to get rid of the bees with their hands.

It's almost hard to beelieve play between NSW and Victoria was delayed for a few minutes because of this #JLTCup pic.twitter.com/NoRrFILZUm

Batting first, Victoria posted a massive 327 in 50 overs. Except White and Peter Handscomb, none of the other Victoria batsmen could add to the runs. During his stay in the middle, White hit 14 boundaries and three maximums. Complementing White, Handscomb during his 89-run stay, hit eight boundaries and two maximums.

In reply, New South Wales could not find the momentum as Victoria bowlers struck at regular intervals. Kurtis Patterson (48), Moises Henriques (77) and Daniel Sams (56) tried to provide resistance but Coleman had other plans in mind.

This is not the first time such an incident has halted the game. In February last year, a game between South Africa and Africa was stopped due to a swarm of bees.

Moises Henriques
Get the latest updates on ICC Women's Cricket World Cup 2022 and IPL 2022, check out the Schedule , Live Score and IPL Points Table. Like us on Facebook or follow us on Twitter for more sports updates. You can also download the NDTV Cricket app for Android or iOS.