Irfan Pathan and Yusuf Pathan will play for India Legends in the Road Safety World Series due to begin tomorrow. 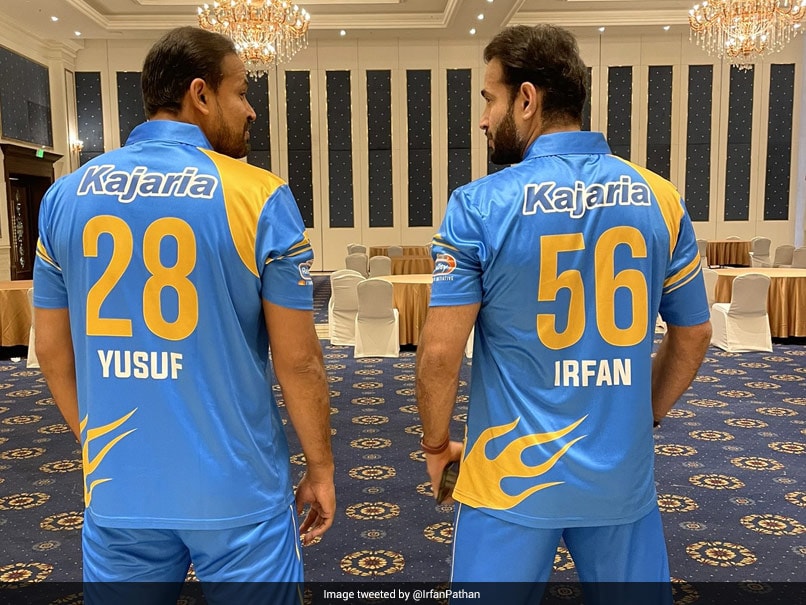 Former India cricketers Irfan Pathan and Yusuf Pathan posed in their India Legends jersey ahead of the Road Safety World Series that begins tomorrow. Irfan, the younger brother to Yusuf, posted on social media two pictures where the brothers are captured flaunting their new jerseys. "Post retirement pic," wrote Irfan in the caption. Both cricketers are members of India Legends, who will be led by Sachin Tendulkar in the upcoming tournament that will feature teams comprising retired cricketers from England, Bangladesh, South Africa, Sri Lanka and the West Indies.

Yusuf recently announced his retirement from all forms of cricket. He played 57 ODIs and 22 T20Is for India and scored 810 and 236 runs respectively in the limited-overs formats.

A right-handed batsman and a handy off spinner, Yusuf played 100 first-class matches and scored 4825 runs in addition to scalping 201 wickets.

Yusuf was part of Kolkata Knight Riders squad that won the Indian Premier League in 2012 and 2014.
Irfan, a seam bowling all-rounder, played 29 Tests, 120 ODIs and 24 T20Is for India before hanging up his boots in January 2020.

He picked up 301 international wickets and scored 2821 runs for India and was part of the team that won the ICC T20 World Cup 2007 in South Africa.

The Road Safety World Series will feature the likes of Brian Lara, Virender Sehwag, Kevin Pietersen, Sanath Jayasuriya and Muttiah Muralitharan among others.

Yusuf Pathan Cricket
Get the latest updates on SA vs IND 2021-22, check out the Schedule and Live Score . Like us on Facebook or follow us on Twitter for more sports updates. You can also download the NDTV Cricket app for Android or iOS.