The Indian women's cricket team failed to click with both the bat and ball, proving to be a no match against a dominant England side in a nine-wicket drubbing in the first T20 Internationals. 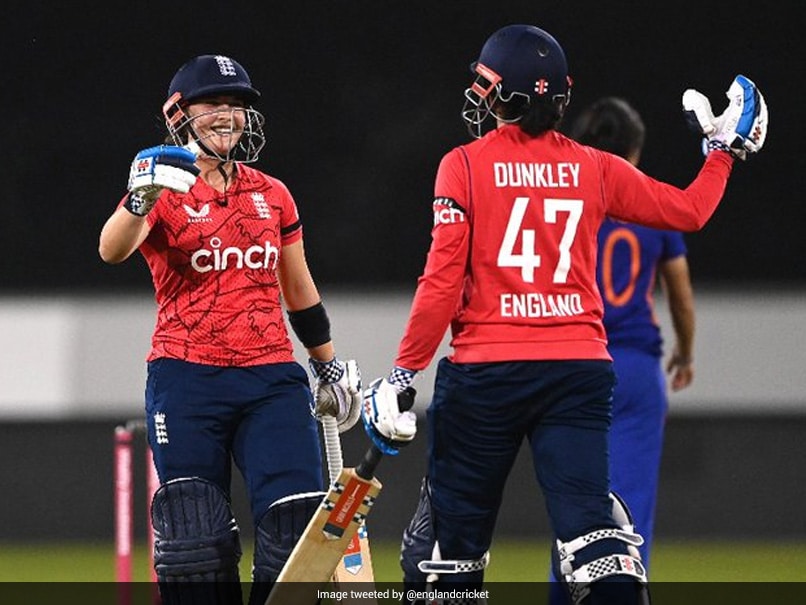 The Indian women's cricket team failed to click with both the bat and ball, proving to be a no match against a dominant England side in a nine-wicket drubbing in the first T20 Internationals. Sent into bat by England skipper Amy Jones, the Indian batters came a cropper against leg-spinner Sarah Glenn's four-for and were restricted to a measly 132 for seven in their stipulated 20 overs at Riverside Ground on Saturday night.

Bowling her full quota of four overs, Glenn finished with excellent figures of 4/23 and posed problems for the Indian batters throughout. With luck on her side, Sophia Dunkley raced to a 44-ball 61 to complete the chase in just 13 overs, even as India endured a forgettable night on the field in wet conditions.

All-rounder Deepti Sharma top-scored for the tourists with a 29-ball 24 and the second best score was 23 by opener Smriti Mandhana.

In between, captain Harmanpreet Kaur blazed away to 20 off 16 balls before being bowled by Glenn.

That summed up India's batting as none of them managed to make a substantial contribution.

Wicketkeeper Richa Ghosh too got a start but fell to medium pacer Freya Davies after racing to 16 in 12 balls.

The big-hitting Shafali Verma gave up her wicket after making 14 off 13 balls, caught by Bryony Smith off the bowling of Glenn, to leave India at 47 for two in the seventh over.

Even as they maintained a good run rate, India lost wickets at regular intervals to give England the upper hand in the first of the three T20Is.

India were 83 for four when Ghosh got out in the 12th overs. But all they could manage in the next overs was just 49 runs.

Chasing 133, England were off to a blistering start with both Dunkley and here opening partner Danielle Wyatt (24 off 16 balls) getting quick runs to put up 60 in only 6.2 overs.

First up, Dunkely survived a caught behind courtesy of a no-ball from Renuka Singh, then Shafali fluffed a straightforward catch at mid-off when the batter was on 15. Renuka was the unlucky bowler again.

There were a number of thick edges too, in between.

Having got the reprieves, Dunkley went on to record her highest score in the format while sharing a stand of 74 runs for the second wicket with Alice Capsey, who remained not out on a breezy 32 off 20 balls.

During her unbeaten stay in the middle, Dunkley hit eight fours and a six.

England Women Harmanpreet Kaur Smriti Mandhana Amy Jones Cricket
Get the latest updates on Fifa Worldcup 2022 and check out  Fifa World Cup Schedule, Stats and Live Cricket Score. Like us on Facebook or follow us on Twitter for more sports updates. You can also download the NDTV Cricket app for Android or iOS.