Mithali Raj failed to shoulder the responsibility when India needed three runs in the last over with six wickets in hand. 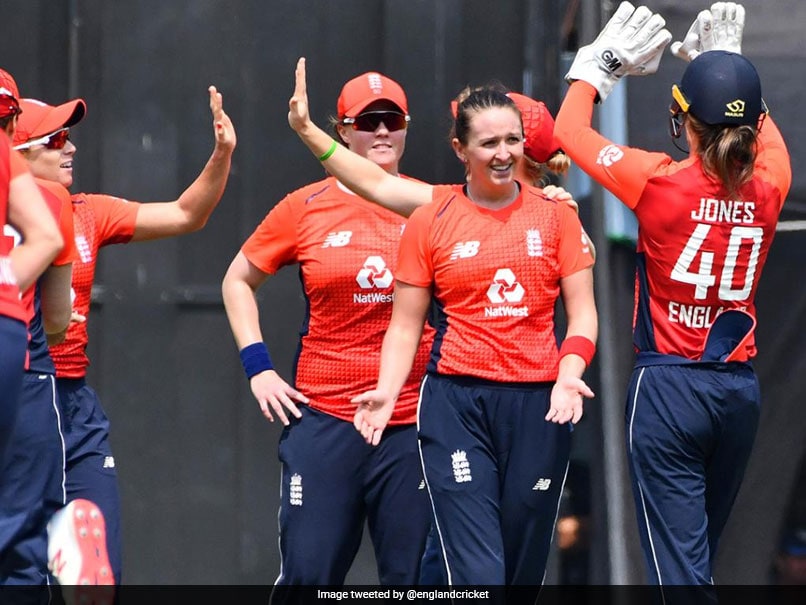 Kate Cross led the bowling attack for England with two wickets in the final over.© Twitter

Despite an impressive half-century by Smriti Mandhana, India women lost the third and final T20 International (T20I) by a solitary run in a last-ball thriller in Guwahati as England women completed a 3-0 whitewash on Saturday. After opting to bat, England managed to score 119 for six in their allotted 20 overs. Chasing the small target, India looked in a comfortable position as Smriti Mandhana smashed 58 off 39 balls, including eight boundaries and a six. Leading run-scorer in women's One-day International cricket, Mithali Raj took the charge of team's run-chase after the departure of Mandhana.

However, the experienced batswoman failed to shoulder the responsibility when India needed three runs in the last over with six wickets in hand. In the end, Mithali Raj was unbeaten on 30, including four boundaries in her 32-ball knock.

Kate Cross led the bowling attack for England with two wickets in the final over. She dismissed Bharati Fulmali and Anuja Patil for five and zero respectively in consecutive deliveries of the last over.

Anya Shrubsole, Linsey Smith and Laura Marsh chipped in with a wicket each in England's nail-biting victory.

Earlier, wicketkeeper-batsman Tammy Beaumont top-scored for England with 29 runs as India restricted the visitors to a modest 119/6.

Anuja Patil and Harleen Deol picked up two wickets each for India, while Ekta Bisht and Poonam Yadav contributed with a scalp each.

India women had lost the first two T20Is at the same venue after having clinched the three-match ODI series 2-1.

India won the first two ODIs at the Wankhede Stadium in Mumbai to seal crucial points as the three-match ODI series was part of the ICC Championship.

England Women Cricket Mithali Raj
Get the latest updates on SA vs IND 2021-22, check out the Schedule and Live Score . Like us on Facebook or follow us on Twitter for more sports updates. You can also download the NDTV Cricket app for Android or iOS.