Smriti Mandhana is leading the Indian T20 squad in the absence of injured skipper Harmanpreet Kaur. 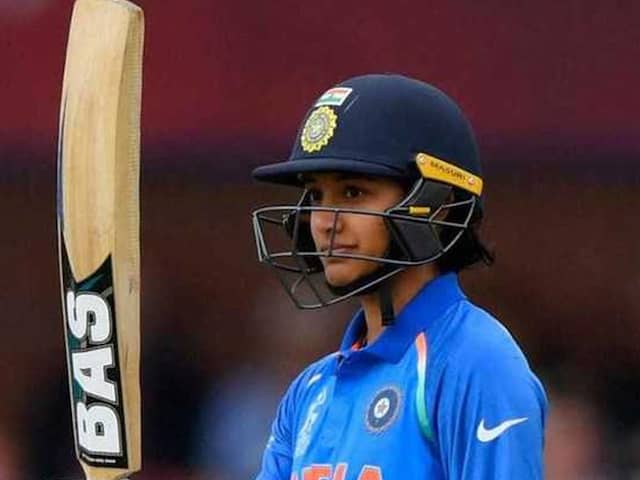 Smriti Mandhana was named ICCs woman cricketer of the year in 2018.© AFP

Smriti Mandhana, who was the ICC's woman cricketer of the year in 2018, is in prime form and has taken the responsibility of India's batting on her shoulders. In the absence of injured Harmanpreet Kaur, she was made India's skipper in the T20 Internationals against England at home. Smriti Mandhana is keen to learn the art of imbibing pressure in crunch situations from senior pro Mithali Raj, who has been India's batting mainstay over a decade.

"The sense of responsibility she has shown over these years. There was a phase of ten years when Indian batting used to depend on her. The fact that she never cribbed about it, and took on that pressure - that is one thing I would like to have in my head because it is hard when you know your wicket is important and that if you lose your wicket, the course of the match might change,” ESPN Cricinfo quoted Mandhana as saying.

"That is a very difficult space to be in as a batter. But she has been consistent, despite being in that headspace - that is a big task. She is calm and relaxed even if there are, say, two or three dot balls. I used to get a bit panicky earlier, but she has always been calm," Mandhana said.

Winning the Cricketer of the Year in 2018 had a huge impact on the 22-year-old left-hander.

"But that (Cricketer of the Year) award actually had a huge impact on me because till the end of the year, during the Big Bash, my body was feeling very fatigued. If you look back, for one and a half years I have not got a break. So from about 21st to 25-26th December, I had got into a kind of zone where I was telling myself, I need rest.

"I did not feel like going and practising, which is very rare. I had to literally push myself to bat, push myself into the gym. But as soon as that news came out, I read it and I was like, you have to get better. You cannot be stagnant. That news motivated me, and the next day I was back to normal: had breakfast, back to practice, wanting to do gym, wanting to do conditioning," she added.

The 22-year-old Mandhana has achieved a great deal of success at a reasonably young age and she has said that does not like to complicate her life and she is taking everything that is coming her way.

"Look, I do not have a complicated life. I do not get into that zone of being happy or sad about life. I am a bit of a neutral person. I want to live my life simply, play cricket. What happened on the ground, keep it there. Think about it for a few minutes and forget it when I leave the ground.

"On tours, with all these youngsters coming in, like Jemi (Jemimah Rodrigues), Aru (Arundhati Reddy), Radha (Yadav), Harleen (Deol) they are always in my room, doing stupid things, talking the most stupid things. I have not watched a movie alone on my iPad over the last 11 months while touring, which is rare. Even if I am watching, there are four-five people watching with me almost all the time. I enjoy being around them," Mandhana said.

Mandhana is currently performing the duties of captain in the T20 series against England as Harmanpreet Kaur was earlier ruled out of the series.

She would be hoping to take her team to a series victory over England. Having lost the first 20, India would hope to bounce back strongly.

India takes on England in the second T20 of the three-match series at Guwahati on Thursday, March 07.

India Women Cricket
Get the latest Cricket news, check out the India cricket schedule, Cricket live score . Like us on Facebook or follow us on Twitter for more sports updates. You can also download the NDTV Cricket app for Android or iOS.