India had won the first two ODIs to seal off the series before the third match. 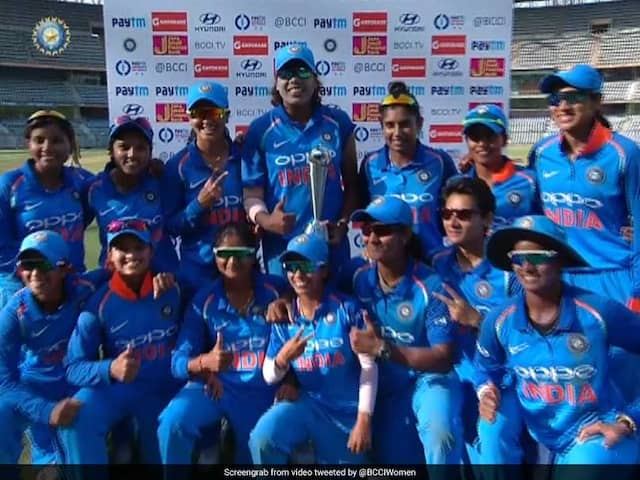 India women's cricket team clinched the three-match One-day International (ODI) series against England 2-1 even though the visitors secured a two-wicket win in the third and final ODI at the Wankhede Stadium, Mumbai, on Thursday. England women put their best foot forward to pull off a win and avoid a whitewash in the ODI series. Danni Wyatt top-scored for the visitors with 56 runs off 82 balls and established two crucial stands with skipper Heather Knight (47) and Georgia Elwiss (33*) in England's easy chase of 206 runs.

England chased down the target in 48.5 overs to claim two points as the three-game series is part of ICC Women's Championship. The World Champions are placed in seventh place and need to be in the top four to qualify directly for the 2021 World Cup.

India had already sealed the series after the winning the first two games.

But then Wyatt and Knight conjured an important 69-run stand for the sixth wicket.

After Knight fell, Wyatt added 56 runs for the seventh wicket with Elwiss to bring the visitors close to the target. Elwiss and Anya Shrubsole (4 not out) then held their nerve to guide the side home.

Earlier, medium-pacer Katherine Brunt (5/28) grabbed a five-wicket haul to restrict India for 205/8. India women had fritted away the foundation laid by Smriti Mandhana (66) and Punam Raut (56) after suffering a middle-order collapse.

Brunt, 33, was the wrecker-in-chief as the hosts suffered a middle-order collapse after they slumped from 129/1 to 150/7.

However, Deepti Sharma (27 not out) and Shikha Pandey (26) later ensured that the hosts crossed the 200-run mark.

England Women Jhulan Goswami Cricket
Get the latest Cricket news, check out the India cricket schedule, Cricket live score . Like us on Facebook or follow us on Twitter for more sports updates. You can also download the NDTV Cricket app for Android or iOS.