Life Isn't Difficult When Rohit Sharma Is At The Other End, Says Virat Kohli

Virat Kohli and Rohit Sharma put on India's biggest-ever ODI stand against the West Indies for any wicket. 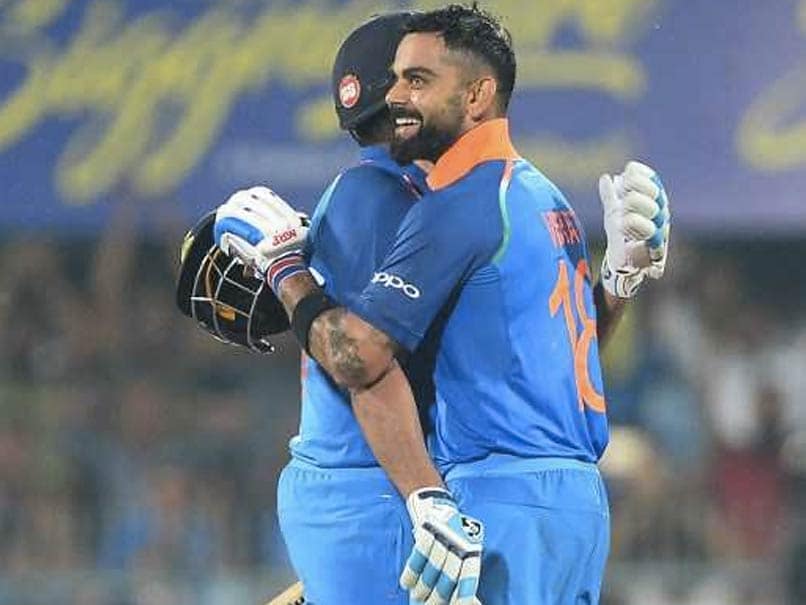 Rohit Sharma hit an unbeaten 152 on Sunday as India beat West Indies by eight wickets in the first one-day international in Guwahati. Chasing 323 for victory, the hosts rode on a 246-run second-wicket stand between skipper Virat Kohli (140) and Rohit to achieve their target with 47 balls to spare. Skipper Virat Kohli hailed his partnership with Rohit Sharma after the pair hit centuries to lead India's eight-wicket demolition of West Indies in the first one-day international in Guwahati. India now lead the five-match ODI series 1-0. "Feels pretty good. A convincing win. I thought West Indies were really good with the bat. And 320+ totals are always tricky," Kohli said after the win.

"But we knew it's all about one partnership. And life isn't difficult when Rohit is at the other end. It's our 5th or 6th double-century partnership, it's a pleasure to bat with him."

The effort from Kohli and Sharma easily overshadowed a dominant 106 by West Indies batsman Shimron Hetmyer Hetmyer in his team's 322/8 after being put into bat first.

In reply, India lost opener Shikhar Dhawan in just the second over of the innings after he was bowled by debutant fast bowler Oshane Thomas.

Kohli then took charge with Rohit, who was happy playing second fiddle to his in-form captain, as the duo put on India's biggest-ever ODI stand against West Indies for any wicket.

The skipper built on his quickfire fifty to get his 36th ODI ton in just 88 deliveries, hitting Kemar Roach for a boundary to make the three-figure mark amid loud cheers from a packed home crowd.

Rohit, who was relatively quiet till his captain's 100, soon got cracking and reached his century with a boundary off-spinner Ashley Nurse.

The two marauding batsmen started to toy with the opposition bowlers before Devendra Bishoo got Kohli stumped against the run of play. Kohli smashed 21 fours and 2 sixes.

Rohit went on to hit the winning six with Ambati Rayudu, who remained unbeaten on 22, at the other end.

The second ODI in the five-game series is scheduled for Wednesday in Visakhapatnam.

Rohit Sharma India vs West Indies 2018 Cricket
Get the latest updates on Olympics 2020, Olympics 2020 Medal Tally, Live Cricket Score . Like us on Facebook or follow us on Twitter for more sports updates. You can also download the NDTV Cricket app for Android or iOS.