India vs West Indies: "A Different Type Of Player": Sanju Samson Not Worried About Consistency

Sanju Samson was called up for the Indian squad to take on the West Indies in a three-match T20 International series, beginning on December 6. 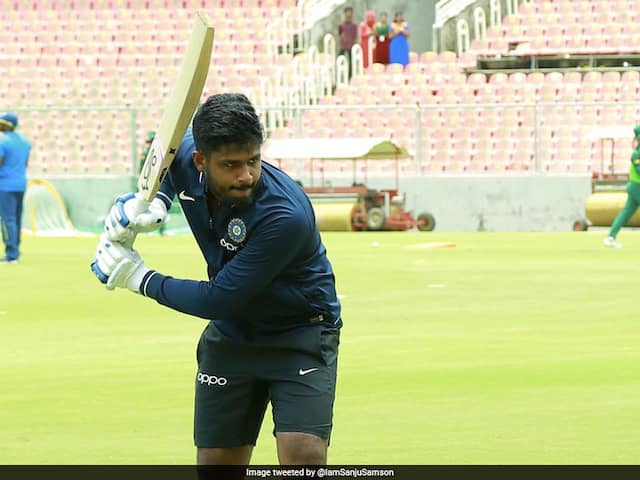 Sanju Samson was called in for the West Indies T20I series as a replacement for Shikhar Dhawan.© Twitter

Sanju Samson, drafted into the Indian T20I squad for the West Indies series for the injured Shikhar Dhawan, is known for playing explosive knocks that can take the match away from the opposition. However, he has faced criticism as many feel that his match-winning knocks are few and far between. However, the Kerala wicketkeeper-batsman is not irked by these concerns as he feels that he would lose his style of play if he made an effort to bring in more consistency in his game.

"I have never thought of that (consistency) as an issue. What I have understood is that I am a bit different type of a player where I just feel that I should go and dominate the bowlers," Sanju Samson told news agency IANS.

"So, when I have a style and I am looking to dominate the bowlers, it can happen...if I go behind consistency, I will lose my style of batting. I don't want to change my style of playing to bring in consistency," he said.

"I like to keep things as simple as possible and when I get the opportunity I look to score big. If I get five innings, I want to score big in one or two innings and win matches for my team," he said.

"Consistency in my innings won't win matches for my team. It is more important to play an outstanding innings to win my team games. I go behind that kind of idea," Samson reiterated.

With MS Dhoni on a sabbatical since India's semi-final exit against New Zealand and Rishabh Pant under immense scrutiny for a series of poor performances, both with bat and behind the stumps, Sanju Samson is one of the players in the selectors' radar who can grab the wicketkeeper-batsman's role come the T20 World Cup in November 2020.

However, he says that his dream is to win the cup for India and not just get a spot in the playing XI.

Definitely the dream is to win the trophy as it has been a while since we won one and I would definitely want to have some quality contributions in the process. That is the dream and I am working towards it," the 25-year-old said.

Sanju Samson was selected for the T20I series against Bangladesh but dropped for the West Indies series without getting a game. However, he has been given another opportunity due to Shikhar Dhawan's injury.