India's head coach Ravi Shastri heaped special praise on Virat Kohli after he notched up his 50th International century and said "sky is the limit" for the skipper who stands at the halfway stage in equalling Sachin Tendulkar's feat. 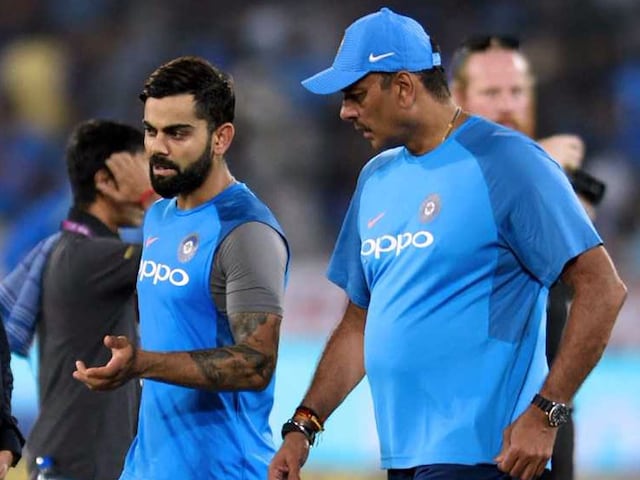 India's head coach Ravi Shastri on Monday heaped special praise on Virat Kohli after he notched up his 50th International century here and said "sky is the limit" for the skipper who stands at the halfway stage in equalling Sachin Tendulkar's feat. "Sky is the limit. He (Kohli) is a fabulous player and I am very happy," Shastri said on the sidelines of a promotional event after the first Test against between India and Sri Lanka ended in a draw.

Kohli's hunger for runs and his ability to convert half-centuries into hundreds was on full view as he bounced back from his first innings duck to score an unbeaten 104 to take India within sniffing distance of a glorious win after being on the backfoot in the first four days.

Wickets fell around him but the Indian skipper kept his calm and raced to his 18th Test century.

In the list of most number of centuries, Kohli sits at number eighth behind Brian Lara (53), Mahela Jayawardene (54), Hashim Amla (54), Jaques Kallis (62), Kumar Sangakkara (63) Ricky Ponting (71) and iconic Sachin Tendulkar (100), who is the only cricketer to get 100 international hundreds.

The Indian captain has now become the eighth batsman ever to score 50 or more International centuries with Tendulkar leading the pack.

Kohli has also joined South African great Hashim Amla to be joint fastest to 50 centuries with Hashim Amla in 348 innings each.

"It was a majestic innings by him (Kohli). He is very good as a captain. He has a long way to go," Ganguly said.

Comments
Topics mentioned in this article
India Cricket Team Sri Lanka Cricket Team Ravi Shastri Virat Kohli Eden Gardens India vs Sri Lanka 2017-18 Cricket
Get the latest Cricket news, check out the India cricket schedule, Cricket live score . Like us on Facebook or follow us on Twitter for more sports updates. You can also download the NDTV Cricket app for Android or iOS.