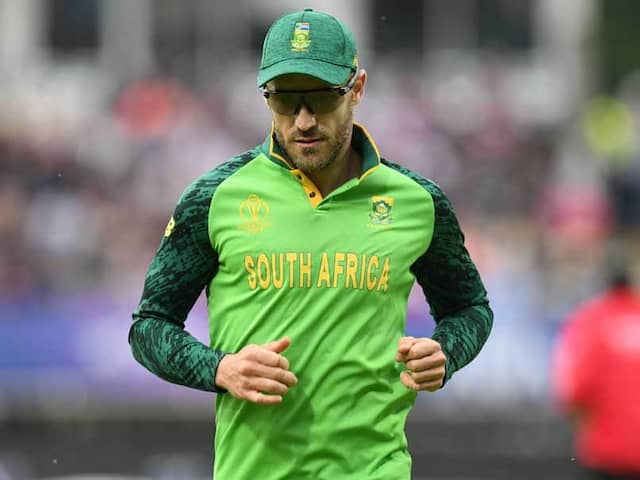 Former skipper Faf du Plessis' long experience of playing in IPL and international cricket in India will come in handy during the upcoming three-match ODI series, feels South Africa head coach Mark Boucher. The series starts in Dharamsala on February 12. Du Plessis, who last played an ODI during the 2019 World Cup, had an indifferent T20I series against Australia, with scores of 24, 15 and 5. "If you go to a place like India, you need to find a balance between youth and experience. I think Faf is really doing well in ODI cricket for South Africa. The last time he played, he got a hundred. He knows the Indian conditions very well," Boucher said during the team's pre-departure press conference on Sunday.

The South African team reached India on Monday morning and will take a chartered flight to Dharamsala on Tuesday.

Boucher feels that having Du Plessis also means he will have some selection headaches, which is a good thing to have.

"It's a good headache to have. Just him being around the squad will add a lot of value and experience as well. We will look at conditions and then put together combinations. Why you would want to have Faf is because he has done really well in those (Indian) conditions."

While South Africa lost the T20 series 1-2 to Australia, they blanked the visitors 3-0 in the ODIs, which gives them confidence going into the series against India.

"T20s are important this year given we have the T20 World Cup. But in general, Proteas and Cricket South Africa (CSA), we need to find ourselves growing.

"We have just beaten a very good team now. We needed confidence and it will certainly give us a lot of confidence."

The former wicketkeeper said that Indian conditions will be tough for a lot of visiting players, who will be touring the country for the first time.

"India is going to be a tough test. Different conditions. Lot of guys haven't played a lot of cricket in India as well. What's impressive is guys have responded to the messages we have sent out to them on batting and bowling perspectives."

Faf du Plessis Mark Boucher Cricket
Get the latest updates on IPL 2020, check out the IPL Schedule for 2020 and Indian Premier League (IPL) Cricket live score . Like us on Facebook or follow us on Twitter for more sports updates. You can also download the NDTV Cricket app for Android or iOS.