Playing for Leicestershire, Rishabh Pant scored 76 runs off 87 balls against India in the ongoing warm-up match. 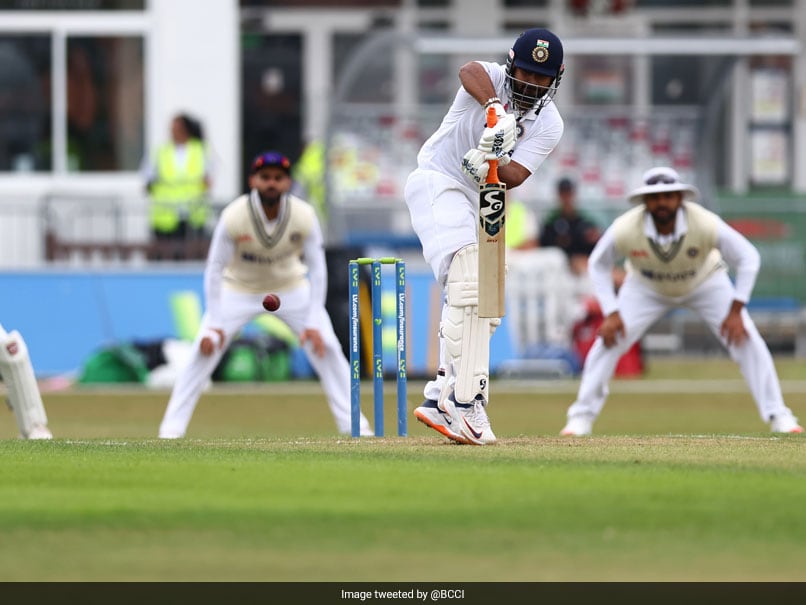 After a below-par T20I series against South Africa with the bat, Rishabh Pant, playing for Leicestershire finally had a ball as he scored 76 runs off 87 balls in the ongoing four-day practice match between India and Leicestershire at Grace Road. It is interesting to note that Pant was playing the match against India, the team that had Mohammed Shami, Umesh Yadav, Shardul Thakur, Mohammed Siraj and Ravindra Jadeja in the bowling unit. The southpaw was eventually outfoxed by Jadeja after handing a catch to Shreyas Iyer.

Pant's knock that was laced with 14 fours and one six saw him trending on social media with the netizens lauding him for his performance ahead of the rescheduled one-off Test between the guests India and England. Notably, India will also play a T20 warm-up match ahead of the Test.

Here is how Twitter reacted to Rishabh Pant's knock:

Fifty by Rishabh Pant in 73 balls against India in the warm up game. A great knock by him! pic.twitter.com/pU2nGgfQaO

Pant In Tests Is Something Else....#RishabhPant

Pant is a different beast in tests. It's just a matter of mindset. In t20s he takes unnecessary pressure on himself of scoring quick runs. Has all kinds of shots just need to be relaxed and enjoy his game in LOIs.

In their second innings, India reached 80/1 by stumps on Day 2 of the match. Srikar Bharat and Hanuma Vihari will resume the Indian innings on their individual scores of 31 and 9.

The only wicket India lost in the innings was that of Shubman Gill. The right-handed batter was dismissed by Navdeep Saini on 38 runs off 34 balls.

Mohammad Shami Mohammed Siraj Cricket
Get the latest updates on IPL Auction 2023 and check out  IPL 2023 and Live Cricket Score. Like us on Facebook or follow us on Twitter for more sports updates. You can also download the NDTV Cricket app for Android or iOS.