Virat Kohli could give some credit to Wriddhiman Saha for convincing him to go for a review on personal score of 180, when off-spinner Mehedi Hasan Miraz got a leg before decision from on-field umpire. 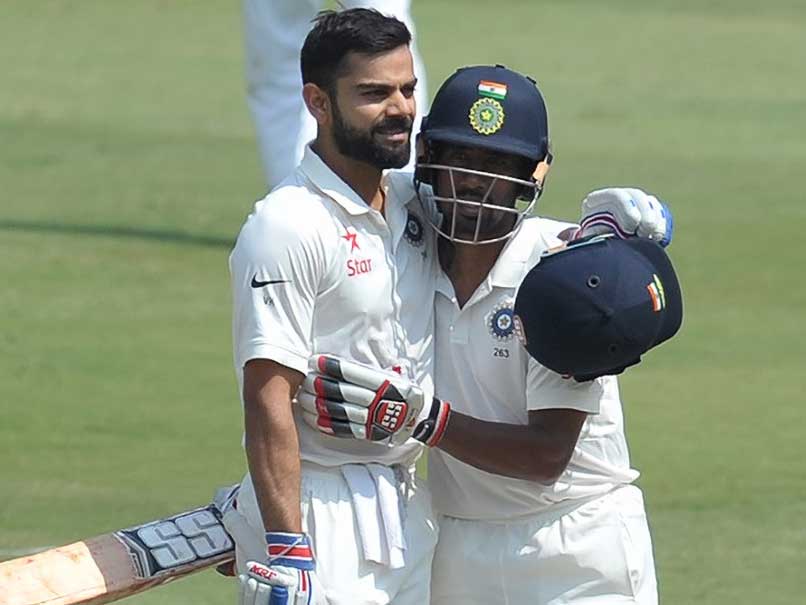 Kohli and Saha are brilliantly complementing each other while going for referrals.© AFP

The Indian cricket team through the years has had a great opening pair like Virender Sehwag-Gautam Gambhir, spin twins like Anil Kumble-Harbhajan Singh or Ravichandran Ashwin-Ravindra Jadeja. After having warmed up lately to the Decision Review System (DRS), the team now have a 'DRS Pair' - skipper Virat Kohli and wicketkeeper-batsman Wriddhiman Saha, who are brilliantly complementing each other while going for referrals.

In fact, Kohli could give some credit to Wriddhiman for convincing him to go for a review on personal score of 180, when off-spinner Mehedi Hasan Miraz got a leg before decision from on-field umpire.

"Virat thought that he was out but I told him that you have probably stretched your front-foot more. I told him that hopefully, the impact may be outside (the off-stump) and the ball had spun sharply enough to miss the leg stump. So he (Virat) took a call and was saved," Saha said.

The glovesman said that Kohli saved a review for the team when he decided against going upstairs after a Taijul Islam armer trapped him leg before.

"During the second time, I was about to ask Virat to check but he was hundred percent convinced that it was out. Also it was umpire's call and even if there was a chance of the delivery barely touching the stumps, it would have been out. Virat didn't take a chance and saved a DRS for the team," he said.

Again when Bangladesh were batting, India got the wicket of opener Soumya Sarkar through a successful DRS after the on-field umpire had ruled not out.

This time Wriddhiman was unsure as to whether there was an inside edge but the skipper was fully convinced that the opener had inside edged it. Virat was vindicated when Sarkar trudged back to pavilion.

Comments
Topics mentioned in this article
India Cricket Team Bangladesh Cricket Team Wriddhiman Saha Virat Kohli Rajiv Gandhi International Stadium, Hyderabad Cricket
Get the latest updates on ICC T20 Worldcup 2022 and CWG 2022 check out the Schedule, Live Score and Medals Tally. Like us on Facebook or follow us on Twitter for more sports updates. You can also download the NDTV Cricket app for Android or iOS.