Shikhar Dhawan will next be seen in action when India take on Australia in a limited-over series at home, starting February 24. 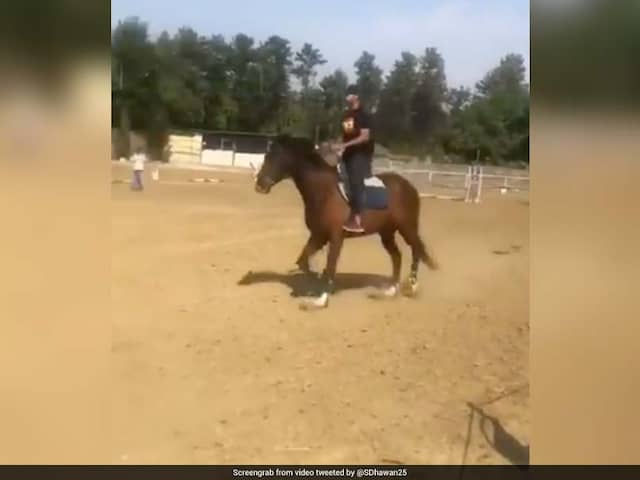 Shikhar Dhawan posted a video of him horse riding.© Twitter

Shikhar Dhawan seems to be enjoying his time away from cricket. The India international posted a video on Twitter of him learning horse riding and by the look of things, the left-hander has already become quite adept at it. Dhawan and other Indian cricket stars are currently resting after returning from the tour of Australia and New Zealand. However, Team India will soon be seen in action when they host Australia for a two-match Twenty20 International (T20I) and a five-match One-Day International (ODI) series, starting on February 24.

Shikhar Dhawan had successful outings in Australia and New Zealand, which will surely be taken out when the Cricket World Cup 2019 squad is announced.

With an abundance of top-order talent waiting in the wings, Dhawan's consistent showing in the Australia T20Is and the New Zealand ODI and T20I series will instill lot of confidence.

Dhawan started the Australia tour on a high with two fine performances in the two-match T20I series. The left-hander ended the series as the top run-getter with 117 runs at an average of 58.50.

However, he could not take that momentum to the ODI series and struggled big time.

The left-hander managed just 55 runs in three matches at an average of 18.33.

The 33-year-old bounced back from the setback and returned to form almost immediately. In the five-match ODI series, Shikhar Dhawan was the second highest run-getter behind teammate Ambati Rayudu.

Dhawan will be hoping to carrying the momentum into the Australia series at home, following which he will be in action with the Delhi Capitals in IPL 2019.