Cheteshwar Pujara hammered a 306 not out on Day 3 of the third unofficial Test against West Indies at Hubli. The visitors are trailing by another 180 runs after reaching 116 for 3 at stumps. 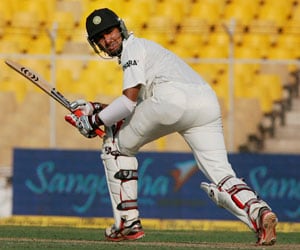 Day three of the final unofficial Test saw India A skipper Cheteshwar Pujara reach his third first-class triple hundred as the hosts dominated proceedings against West Indies A. All the updates from Day 3, as it happened:

West Indies are 116 for 3 after 35 overs at stumps, trailing India by 180 runs. Narsingh Deonarine (44*) and Assad Fudadin (36*) have ensure no more inroads are made by the Indian bowlers. Zaheer Khan Ishwar Pandey and Dhawal Kulkarni have struck once for the hosts.

The only Indians now to score three triple centuries in fc cricket are both from Saurashtra - Ravindra Jadeja & Cheteshwar Pujara.

# WICKET! Zaheer Khan, Dhawal Kulkarni provide early breakthroughs to India A. Zaheer trapped Kieran Powell leg before wicket for six while Kulkarni removes Leon Johnson for one. West Indies 268 and 49/2 in 5 overs against India A 564/9d, trail by 247 runs.

# That's tea and declaration! Cheteshwar Pujara declares Indian innings on 564/9 after slamming his third triple ton in first-class cricket. Pujara remains not out on 306.

# Triple century! Cheteshwar Pujara is simply fantastic. He has slammed his third first-class triple ton to become the 9th batsmen in the history of the game to do so. India A 564/9 ( (150 overs), lead West Indies (268) by 296 runs.

# Cheteshwar Pujara is batting on 172 and looks in a fabulous touch. He has been joined by Uday Kaul after Paras Dogra was bowled by Nikita Miller for 7 runs. Pujara and Kaul have added 27 runs for the sixth wicket. India A 386/5 (112 overs), lead West Indies (268) by 118 runs.

# Milestone! India A skipper Cheteshwar Pujara brings up his 150. Abhishek Nayar, however, is out after scoring 11 runs. Together they added 23 runs for the fourth wicket. Paras Dogra has joined the skipper in the middle.

# Abhishek Nayar was the main hero from a first day. His figures of 4/61 left the opposition reeling. Expect him to come out all guns blazing once again when his side chases the 1st innings target. (Also read: Nayar says not giving boundaries to WI A helped)

# Focus on the opening day on Wednesday was on Virender Sehwag and Gautam Gambhir - veterans who areÂ  trying to show that they still have their famed skills intact. India A skipper Cheteshwar Pujara however opted to field after winning the toss. His bowlers were forceful and West Indies A collapsed on 268. India A skipper Cheteshwar Pujara regained his form with an unbeaten century. While Gambhir hit a patient century, Sehwag once again failed to convert a good start. (Day 2 highlights)

Comments
Topics mentioned in this article
Cricket Cheteshwar Pujara Gautam Gambhir
Get the latest updates on ICC T20 Worldcup 2022 and CWG 2022 check out the Schedule, Live Score and Medals Tally. Like us on Facebook or follow us on Twitter for more sports updates. You can also download the NDTV Cricket app for Android or iOS.