In a massive blow to the office-bearers of the Board of Control for Cricket in India (BCCI), the Supreme Court on Monday ordered the removal of Anurag Thakur as President and Ajay Shirke as Secretary of the cricket body and accepted all Lodha Panel recommendations in toto 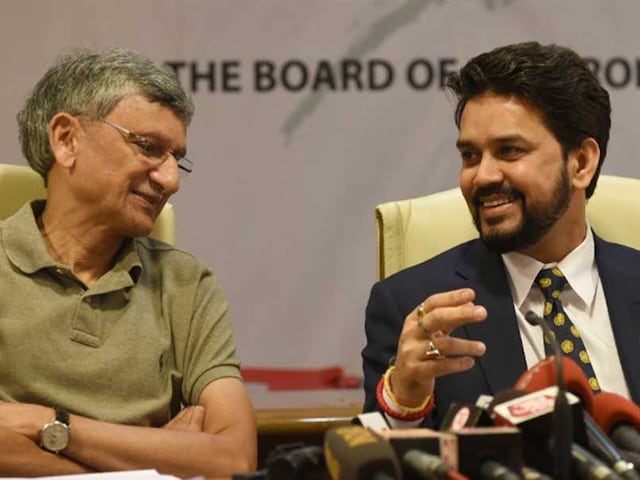 The Supreme Court on Monday ordered the removal of Anurag Thakur as Board of Control for Cricket in India (BCCI) President and said that all BCCI office-bearers who haven't fallen in line with Lodha Panel recommendations be suspended. The apex court also asked for the removal of BCCI secretary Ajay Shirke. Supreme Court also added that all BCCI administrators over 70 years will also have to relinquish their positions.

At its last hearing two weeks ago, the court had said Mr Thakur seemed to have "committed perjury" after it was informed that he had made a false statement on asking the International Cricket Council or ICC to clarify whether a recommendation made by the Lodha Committee amounted to interference in the board's running.

The Supreme Court said the committee of administrator will look after the affairs of BCCI while senior-most Vice-President of BCCI will act as President and Joint Secy will act as Secy.

The Supreme Court has requested senior advocate Fali Nariman and Gopal Subramaniam to assist in nominating persons of impeccable integrity as members of committee of administrators.

The Supreme Court also said that all office bearers of BCCI and state associations will have give an undertaking to abide by recommendations of Lodha Committee.

Meanwhile, in an exclusive chat with NDTV, Ajay Shirke refused to react to the Supreme Court order and said that his time with the BCCI was over.

"I have nothing to react, my role in BCCI is over. If SC has asked me to leave, that's fine. I hope the new administration runs BCCI well," Shirke told NDTV.

"I don't regret anything. I don't have any personal ambitions," he added.

Responding to the latest judgement, Justice Lodha said that it was an inevitable consequence of the board's foot-dragging.

"One should understand that when the order of the Supreme Court, which is the highest court of the land, has come, it has to be obeyed by all. It is the law of the land. Nobody can escape it," Justice Lodha said.

"There were obstructions. There were impediments. We fixed the timeline that was not adhered to. We submitted three reports before the Supreme Court, even then it was not implemented."

"It's the victory for the game of cricket and it will flourish, administrators come and go but it is for the benefit of the game," Justice Lodha added.

The Lodha Committee, appointed by the Supreme Court after a betting scandal in the Indian Premier League, had recommended sweeping changes in the way the board is run and led and had complained that the BCCI or Board of Control for Cricket in India was refusing to implement them.

The Supreme Court had given the board time until December 3 to implement the reforms suggested by the Lodha panel. The board had pleaded that it could not implement all the reforms, which include large-scale structural and management changes.

In earlier hearings the court has rapped the board on the knuckles for not obeying that order, asking whether it believes "it is a law unto itself."

Comments
Topics mentioned in this article
India Cricket Team Anurag Thakur BCCI Cricket
Get the latest Cricket news, check out the India cricket schedule, Cricket live score . Like us on Facebook or follow us on Twitter for more sports updates. You can also download the NDTV Cricket app for Android or iOS.