The incident occurred during the India-Pakistan Group B clash at the Providence Cricket Ground in Guyana. 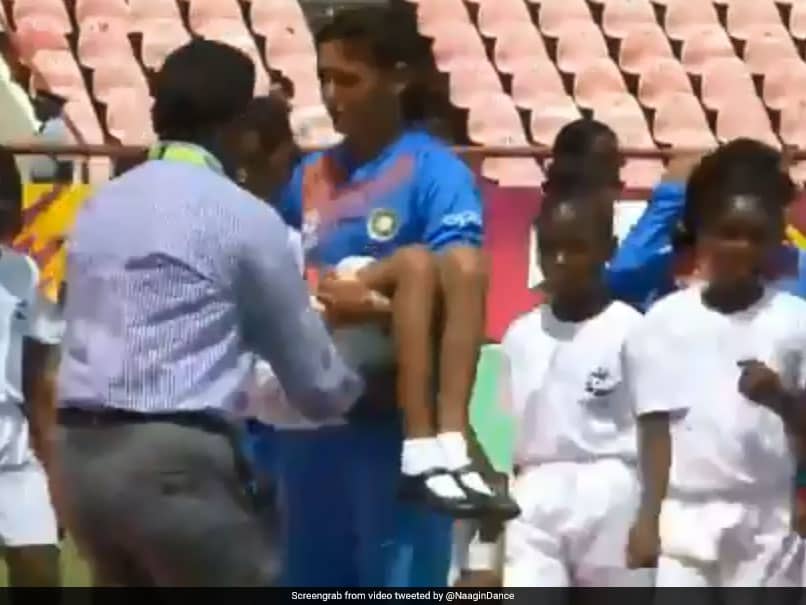 The Indian women's cricket team captain Harmanpreet Kaur has been in the limelight since the start of the ICC Women's World T20 on November 9. After becoming the first Indian to score a T20I century in the opening clash against New Zealand, she has now caught everyone's attention for a reason far removed from cricket. During the second Group B clash against arch-rivals Pakistan, Harmanpreet carried an unwell mascot - a little girl - off the field, and handed her over to people who could attend to her health emergency.

The incident occurred soon after the players sang the National Anthem, before the start of play on November 11 at the Providence Stadium in Guyana.

A video of the incident is doing the rounds on social media.

Harmanpreet has played an instrumental role in India's ongoing campaign at the ICC Women's World T20, as her century ensured India start off on a winning note in the opener versus New Zealand, following which she helped India cross the finish line in a 134-run chase against Pakistan on November 11.

India's next Group B clash is on November 15 against Ireland.

The Indian women's cricket team hasn't been very competitive in the shortest format compared to the 50-over game in which they scripted a path-breaking moment last year when they reached the 2017 World Cup final. In the end, nerves got the better of them and they lost the title clash to England after being in complete control at one stage.

Harmanpreet and recently appointed coach Ramesh Powar insist that the team has learnt from that final loss and the presence of youngsters, including six World Cup debutants, makes the squad "fearless".

India have never won the World T20 in their previous five attempts with their best result, a semi-final appearance, coming in 2009 and 2010.

Pakistan Women Harmanpreet Kaur Cricket
Get the latest updates on IPL 2021, IPL Points Table , IPL Schedule 2021 , live score . Like us on Facebook or follow us on Twitter for more sports updates. You can also download the NDTV Cricket app for Android or iOS.