Ian Chappell said that Hardik Pandya can be the extra bowling option for India and be the third seamer if they choose to play two spinners in any match. 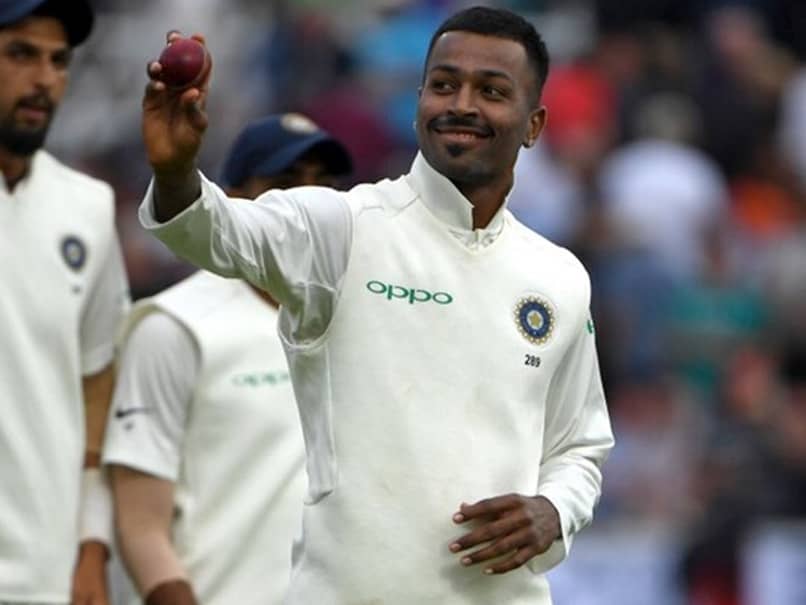 Hardik Pandya has not played for India's Test side since 2018.© AFP

Australian great Ian Chappell feels India should pick Hardik Pandya in the Test side when they make the trip Down Under later this year as the temperamental all-rounder would be crucial to handling the challenge posed by a strong home batting line-up. Pandya hasn't featured in Tests since 2018 and has only recently recovered from a career-threatening back injury. The big-hitting medium pacer is a vital cog in India's limited-overs set-up. India and Australia are set to clash in a full series, including four Tests, beginning October and lasting till January 2021.

"It will help if Hardik Pandya is available. He gives India an extra bowling option to maintain the pressure when the leading fast bowlers need a rest," Chappell wrote his column for 'ESPNCricinfo'.

Pandya had recently spoken about the challenge that Test cricket is for him now given his injury-prone back, which needed surgery last year.

He said that he understands his importance in limited-overs format.

"This is Pandya's chance to gradually build up overs in the three Tests before the SCG match, where he could act as the third seamer so that a second spinner can be included," Chappell said.

"Having Pandya at seven would necessitate Rishabh Pant keeping and batting at six."

Chappell feels Indian selectors will have to make tough calls while zeroing in on spinners with the likes of Ravichandran Ashwin, Ravindra Jadeja and Kuldeep Yadav to choose from.

"Choosing a spinner will prove a major headache for the Indian selectors. R Ashwin has a great overall record, but not so much in Australia. Ravindra Jadeja's all-round talents and improved bowling form make him a legitimate challenger, while Kuldeep Yadav's wrist-spin is the biggest wicket-taking threat on Australian pitches. The decision will call for brave selections," he reckoned.

Chappell said India's biggest challenge in the Test series will be navigating through a strong Australian batting line-up, which now doesn't rely too heavily on David Warner and Steven Smith.

Under Virat Kohli, India scripted history when they earned their maiden Test series triumph Down Under in 2018-19, after trying for seven decades.

However, Australia are a different team now with Smith and Warner back in the side having served one-year ball-tampering bans in addition to the rise of young Marnus Labuschagne.

"India's biggest challenge will be navigating a strong Australian batting line-up. In addition to Smith and Warner, the meteoric rise of Marnus Labuschagne at No. 3 has helped solidify the batting," Chappell wrote.

"Australia are now far less reliant for success on big contributions from Smith and Warner," he added.

For the home side, Chappell feels the choice of bowlers is straightforward.

However, the former captain is not too confident about the abilities of opener Joe Burns.

"The pace bowling is in great shape, with Pat Cummins, Mitchell Starc, Josh Hazlewood and James Pattinson forming a potent quartet. The spinner is a simple decision - Nathan Lyon and then daylight."

"The batting line-up is not as clear cut. The recently announced contract list suggests Joe Burns will be Warner's opening partner. Burns is vulnerable early and this is India's big opportunity to first get at Labuschagne and then Smith while the ball is new."

"Australia's middle order is an uncertain quantity, with Travis Head, Matthew Wade and Mitchell Marsh vying for two spots. That middle-order fragility highlights the rewards on offer for keeping Smith, Warner and Labuschagne in check."

Chappell said that Warner's opening partner is a weakness India should exploit.

"Warner's opening partner is an area of weakness that India need to fully exploit, but keeping the 'big three' quiet should be the attack's main focus," he said.

Chappell feels Australia's potent bowling attack will keep a check on the dangerous Kohli and Cheteshwar Pujara, who was the star of India's breakthrough 2-1 series win over last time.

"Australia's strong attack should restrict India's scoring to reasonable levels despite the daunting presence of Virat Kohli and Cheteshwar Pujara. This heavyweight bout will be decided by who punches above their weight - Australia's 'big three' or India's 'big bats'."

David Warner Joe Burns Cricket
Get the latest updates on India vs Australia Series, check out the India vs Australia Schedule for 2020-21 and Ind vs Aus live score . Like us on Facebook or follow us on Twitter for more sports updates. You can also download the NDTV Cricket app for Android or iOS.