Krunal Pandya posted a video on his social media account on Saturday where both the Pandya brothers are seen singing a famous Tamil song. 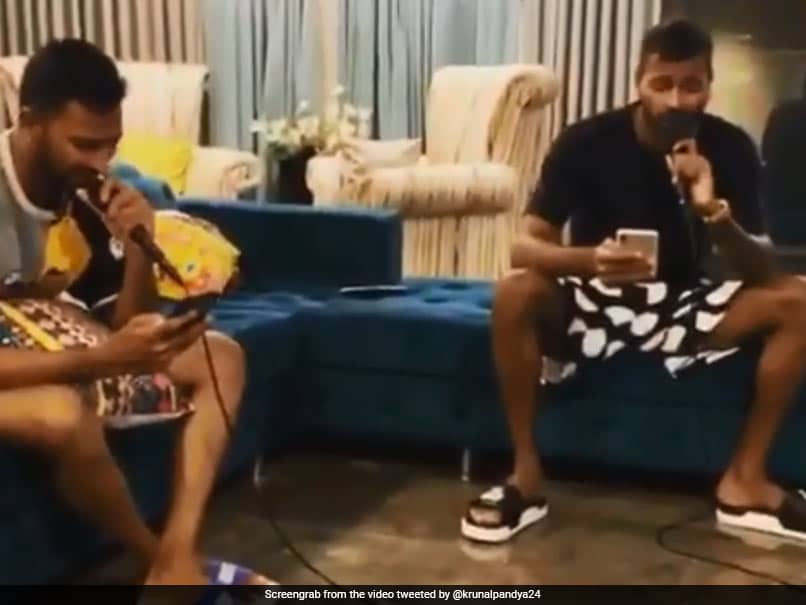 Krunal Pandya and Hardik Pandya were showcasing their singing skills in a video shared on Twitter.© Twitter

Hardik Pandya and Krunal Pandya have become an integral part of the T20I setup of the Indian team. Both the players made a name for themselves with good performances in the Indian Premier League (IPL), playing for the Mumbai Indians (MI). Krunal Pandya was given a chance to represent India in the shortest format while Hardik has featured for the country across all formats. Krunal, who was adjudged as player of the series in the recently-concluded T20I series against the West Indies took to Twitter to share a video of him singing a song with his brother Hardik on Saturday.

In the T20I series against the West Indies, Krunal Pandya scored 32 runs in two innings and with the ball he picked up three crucial wickets in three matches.

India completed a clean sweep in the T20Is and were on top in the first One-Day International after rain in Guyana led to a no result.

In the first ODI in Guyana, only 13 overs were possible before inclement weather affected the proceedings on Thursday.

With two matches left in the ODI series, both teams will be hoping to get a full game as the action shifts to Port of Spain in Trinidad. The second and third T20I will be played at the Queen's Park Oval Ground on August 11 and 14 respectively.

After the ODIs, India and the West Indies will begin their ICC World Test Championship campaign with a two-Test series starting  August 22.

For the Test matches, India will have the services of Jasprit Bumrah who were given rest after the World Cup 2019.

Hardik Pandya Cricket
Get the latest updates on India vs England Series, India vs England , live score and IPL 2021 Auction . Like us on Facebook or follow us on Twitter for more sports updates. You can also download the NDTV Cricket app for Android or iOS.