Virat Kohli scored a half-century and stitched a 106-run stand with young wicketkeeper-batsman Rishabh Pant in the 3rd T20I against the West Indies. 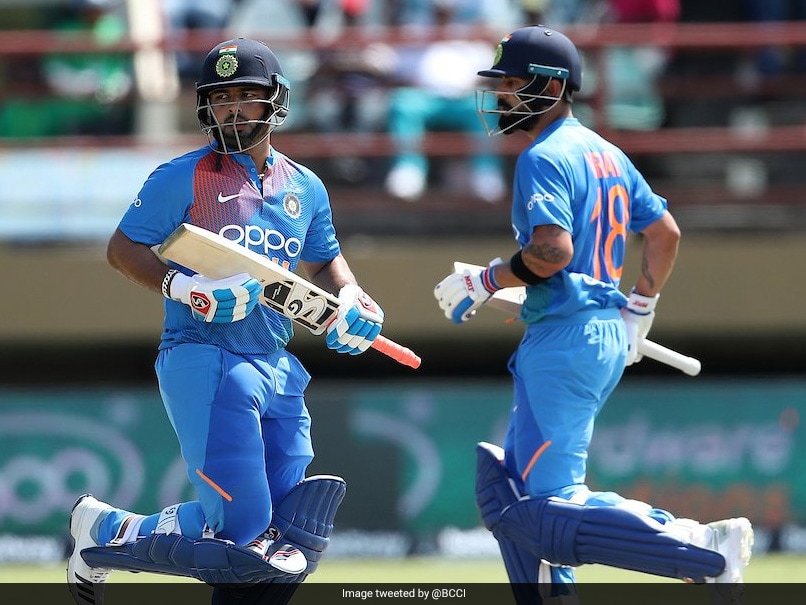 Virat Kohli led from the front as India defeated the West Indies by seven wickets in the third T20 International in Guyana to complete a 3-0 whitewash in the three-match series on Tuesday. The Indian captain scored a half-century and stitched a 106-run stand with young wicketkeeper-batsman Rishabh Pant to help India recover after losing both the openers early in chase. Rishabh Pant, who top-scored for India with an unbeaten knock of 65, scored the winning six as India chased down the 147-run target with five balls to spare.

Rajasthan seamer Deepak (3-1-4-3) made full use of his only opportunity in this tour taking three wickets his first two overs to leaving West Indies tottering at 14 for 3. He got the ball to swing both ways as he removed pinch-hitter Sunil Narine (2), Evin Lewis (10) and Shimron Hetmyer (1).

However Pollard counter-attacked with great gusto hitting as many as half a dozen sixes in his 45-ball-58 -- his first half-century for the West Indies in seven years.

Along with Nicholas Pooran (17), who played the second fiddle, Pollard added 67 for the fourth wicket as the Caribbeans looked to have recovered from their initial slump.

However Navdeep Saini came back for his second spell to first dismiss left-hander Pooran with an off-cutter (leg-cutter for the batsman) which was edged to Rishabh Pant behind the stumps.

Saini (2/34 in 4 overs), who had trapped Pollard leg-before with a dipping full-toss in the first game then bowled a slower delivery that pegged back the middle stump breaching through his bat and pad. West Indies were once again reeling at 105 for 5 before Deepak's younger cousin Rahul (1/27 in 3 overs) got his maiden wicket in the form rival skipper Carlos Brathwaite.

However Powell smashed his way to an unbeaten 32 off 20 balls to prop up the Windies total.

India captain Virat Kohli gave the final over to Saini instead of Deepak who had an over left. But the ploy didn't work too well as Powell stuck into him with two sixes that damaged his final figures.

India Cricket Team West Indies vs India 2019 West Indies vs India, 3rd T20I Cricket
Get the latest updates on ICC T20 Worldcup 2022 and CWG 2022 check out the Schedule, Live Score and Medals Tally. Like us on Facebook or follow us on Twitter for more sports updates. You can also download the NDTV Cricket app for Android or iOS.