Harbhajan Singh's Special Chole: You Have Seen Him Spin The Ball, Now Watch Him Cook

Bhajji, as he's fondly known in his friend and cricket circle, shared a video in which he's seen preparing food in the kitchen. 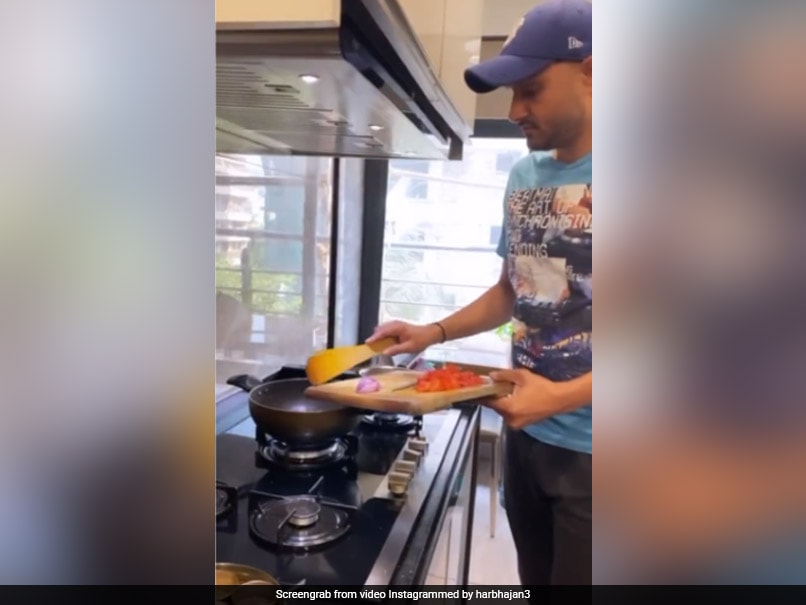 In his heyday, legendary off-spinner Harbhajan Singh could win India games on his own. We have seen him spin the ball for nearly two decades, sending the best of batsmen packing. But did you know spinning the ball was not his only talent? Yes, the Turbanator can also use the cooking spoon to prepare some delicious chole as was seen in his latest Instagram post on Friday morning. Bhajji, as he's fondly known in his friend and cricket circle, has shared a video in which he's seen preparing food in the kitchen. He first puts a finely sliced onion into the pan containing oil. This was followed by the addition of some tomatoes and spices. Then he adds some boiled chole to the pot and stirs the preparation. There you go. Chef Harbhajan Singh's chole dish is ready.

Reacting to this new avatar of Bhajji, one of his fans said: "Good morning, Chef."

Some found the item "yummy".

At the time of writing, the post had already accumulated over 15,000 likes and people were lauding "Chef Bhajji" for his cooking talent.

Harbhajan Singh, who plays for the Kolkata Knight Riders (KKR) in the Indian Premier League (IPL), will be back in action once the marquee T20 tournament returns in September.

Needless to say, he has a big responsibility on his shoulders, for KKR are currently struggling on the seventh spot in the points table. They have managed to win only 2 of their seven games under captain Eoin Morgan.

Meanwhile, the Board of Control for Cricket in India (BCCI) had announced plans to complete the remaining matches of IPL in the UAE and said the decision has been taken because of the monsoon season (September-October) in India.

"See we took this decision to conduct IPL in the UAE because it will be monsoon here and it will not be feasible to hold matches here in September and that is why we are taking IPL to the UAE," BCCI Secretary Jay Shah told news agency ANI.

Speaking of the T20 World Cup, which is scheduled for October in India, Shah said the board will only decide after a discussion with the International Cricket Council (ICC).

India Cricket Team Harbhajan Singh Cricket
Get the latest updates on ICC T20 Worldcup 2022 and CWG 2022 check out the Schedule, Live Score and Medals Tally. Like us on Facebook or follow us on Twitter for more sports updates. You can also download the NDTV Cricket app for Android or iOS.