Prithvi Shaw matched Sachin Tendulkar's feat of scoring centuries on his debut in domestic tournaments like Ranji Trophy and Duleep Trophy in 2017. 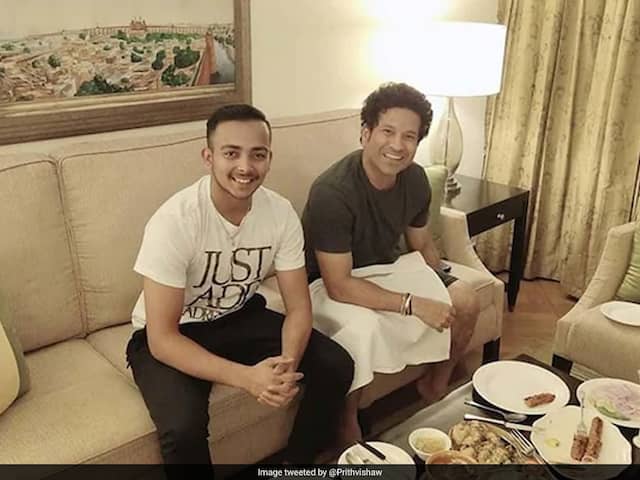 Prithvi Shaw was instantly linked with Sachin Tendulkar when he scored a century on Ranji Trophy debut.© Instagram

Comparisons to India's "god of cricket" Sachin Tendulkar have not always helped Prithvi Shaw as he seeks to put a doping ban and injury worries behind him and cement his place in the national side. Shaw, now 20, was instantly linked with Tendulkar when he matched the feat of the 'Little Master' by scoring centuries for Mumbai on his debut in domestic tournaments like Ranji Trophy and Duleep Trophy in 2017. He then led India to victory at the Under-19 World Cup, and burst into the Test team in 2018 with a match-winning 134 against West Indies, becoming the youngest Indian to score a century on debut at 18 years, 10 months and 25 days.

But since then, the boyish batsman has followed a rocky path.

An ankle injury ruled him out of India's historic first Test series triumph in Australia last year, and he was then slapped with a back-dated eight-month ban for taking a prohibited anti-asthma drug.

"He is a special talent and I am a little disappointed with the way things have taken its course after his ankle injury and then his ban for using the banned substance," former Test opener Wasim Jaffer told AFP.

"Seeing all of this troubles me because he is very, very talented. But he needs to be disciplined if he wants to achieve great things.

"He is living in that Indian circle where he has got role models like Virat Kohli, Rohit Sharma, Shikhar Dhawan who are so disciplined."

Jaffer, who played 31 Tests for India, added: "There is much competition and he missed so many Tests and internationals and does not need to do that because this is his time to fulfill his potential."

Shaw, who has played four Tests and three ODIs, made headlines around the world as a 14-year-old when he smashed a record 546 off 330 balls in a 2013 school competition.

That evoked memories of Tendulkar's 326 not out in his 664-run partnership with Vinod Kambli in the same tournament, the Harris Shield, in 1988. Comparisons have been made ever since.

Shaw has admitted there is a downside to being constantly likened to Tendulkar, a hero among cricket fans who holds the record for runs in Tests and one-day internationals.

"There is pressure when people compare me to him. But I take it as a challenge. I try to play like him. He is the god of cricket," Shaw told an online discussion with the Delhi Capitals, his Indian Premier League franchise.

Jaffer said Shaw has to be mentally equipped to deal with the pressures, like any international star.

"Whenever you perform at the top level, the media and the people hype you so much, but it is an individual's responsibility to learn," said Jaffer.

"Virat keeps himself grounded. Every rising batsman in Mumbai circles is right away compared to Tendulkar. Everything boils down to performance."

Shaw, who was only eight when he first met Tendulkar, said he regards the batting legend as a mentor and sometimes speaks to him about the mental challenges of the game.

"Now also whenever I go for practice, if Sachin Sir is there to watch me, he will talk, not much technically but mentally more," Shaw said, during a live chat on Instagram.

Veteran commentator Charu Sharma believes Shaw has lived up to the intense hype.

"Because when you play school cricket or local league cricket, the leap from there to international cricket is a Grand Canyon. He has taken that leap and has landed on the right side because of all the early work he did," Sharma told AFP.

"Prithvi, like Rohit Sharma and Tendulkar, can adjust very well despite his aggressive stance and can assess the ball quicker than many other cricketers.

He added: "If he keeps himself physically well, mentally he is a very strong kid, he will be able to play for India for a very long time".

Delhi Capitals Cricket
Get the latest Cricket news, check out the India cricket schedule, Cricket live score . Like us on Facebook or follow us on Twitter for more sports updates. You can also download the NDTV Cricket app for Android or iOS.