It has been 11 years since Mahendra Singh Dhoni led Team India to a historic T20 World Cup title victory in 2007. 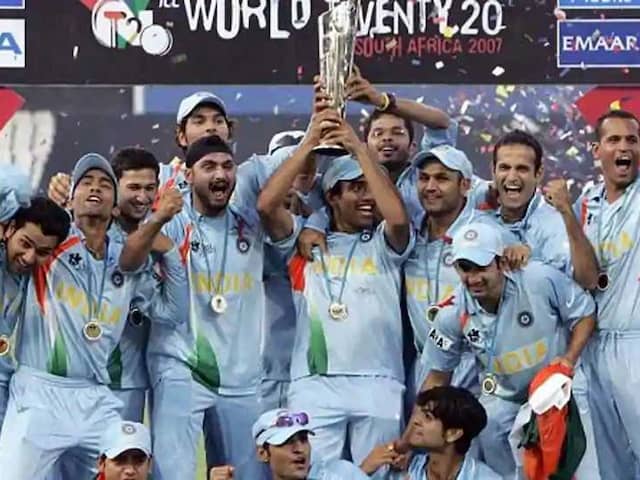 It has been 11 years since MS Dhoni led India to a historic T20 World Cup title victory in 2007.© AFP

It has been 11 years since Mahendra Singh Dhoni led Team India to a historic T20 World Cup title victory in 2007. India defeated arch-rivals Pakistan by five runs in a thrilling final at the jam-packed The Wanderers Stadium in Johannesburg. From Gautam Gambhir's magnificent batting to Joginder Sharma's last-over nerve-wrecking over, the memory of the title win is still etched in the billions of hearts. The 2007 T20 World Cup winning Indian team members on Monday took to social media and recalled the historic moment.

Can't explain how beautiful moment this was! One epic, thrilling final against Pakistan..11 years ago in Johannesburg! #Throwback #MemoryLane #ProudMoment pic.twitter.com/blYCAkCgOk

Gautam Gambhir, who scored a brilliant 75 off 54 balls to help India post 157/5 in 20 overs, posted the victorious moment on his Twitter handle.

While I am proud of the yesterday of 2007 (on left) but the fact is it was 11 years ago. I'd like to create more space for guys who are doing a fantastic job today (on right), the class of 2018 @BCCI pic.twitter.com/vCkTfkqOBE

Irfan Pathan, who claimed the prized wickets of Pakistan Shoaib Malik (8), Shahid Afridi (0) and Yasir Arafat (15), wrote: "It's been 11 years since we won the first ever twenty World Cup. What's your memory as a fan of that great run we had in that tournament in 2007?? #worldcup #cricket."

It’s been 11 years since we won the first ever t twenty World Cup. What’s your memory as a fan of that great run we had in that tournament in 2007?? #worldcup #cricket

#OnThisDay, 11 years ago, a young and raw @iamyusufpathan opened the batting with @GautamGambhir in the ICC World T20 final. He scored a quickfire 15 to provide #TeamIndia with the start they needed against their arch-rivals, Pakistan. And the rest as we know, is history! ?? pic.twitter.com/qG0Ve41Xq3

Pacer RP Singh, who recently called time on his career, claimed three wickets in the epic final against the arch-rivals Pakistan.

One of the finest memories of my Cricketing career. At the start of the tournament, not many people believed that we could do well and by the end of it, it was a completely different story altogether. Proud to be winners of the first-ever #WT20 Championship! ???? pic.twitter.com/VYQtkjxJPj

The match is famously known for Joginder Sharma, who bowled the last over in the final when Pakistan needed 13 runs with one wicket in hand.

After being hit for a six by Misbah- ul-haq, he eventually dismissed the Pakistani batsman to hand India a thrilling win.

Yusuf Pathan RP Singh Cricket
Get the latest Cricket news, check out the India cricket schedule, Cricket live score . Like us on Facebook or follow us on Twitter for more sports updates. You can also download the NDTV Cricket app for Android or iOS.