Virat Kohli was accosted on the pitch during both Tests vs the Windies at Rajkot and Hyderabad while Rohit Sharma had the experience during a first-class game. 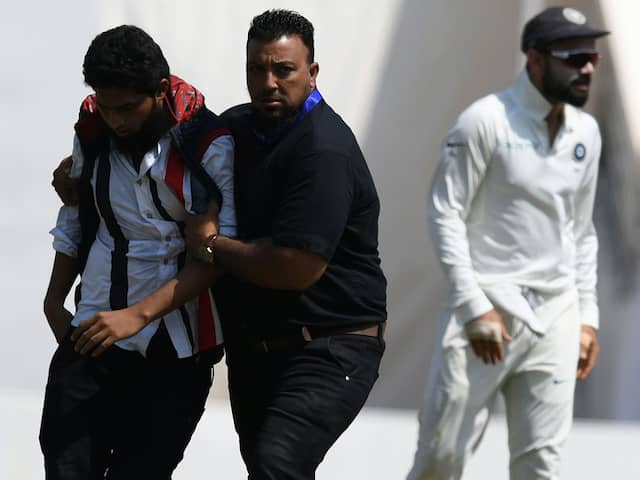 Instances of fans invading the field of play during live matches have risen of late. Last week, Indian cricket captain Virat Kohli had a fan running at him to touch his feet while batsman Rohit Sharma saw another follower try to plant a kiss. Taking note of these incidents, former Indian batsman Aakash Chopra expressed his concern over the spurt in fans' pitch invasion cases. "Lately too many fans have managed to reach the middle of the pitch....genuine concern. Please keep the players safe.... #Kohli #Rohit #MSD", he posted on his official Twitter account. After sharing the message, Aakash Chopra was at the receiving end of fans who didn't concur with the former player.

Lately too many fans have managed to reach the middle of the pitch....genuine concern. Please keep the players safe.... #Kohli #Rohit #MSD

How come a player is unsafe with a fan!!!
Are u a bunch of God in ur own world?

Kis baat ke bade log bhai ?? Limelight me rehte hain hamesha esliye ?? They are just professionals like us nothing special or extra ordinary..!!

What's insecurity there ??
crossed limits to reach/touch their Ideal/favorite player is called devotion.
I don't think anything wrong in that until anything unpleasant happens

A fan had recently broken through the security cordon to click a selfie with India skipper Virat Kohli during the second Test versus the West Indies in Hyderabad. He had a similar experience in Rajkot too.

Rohit Sharma, who was India's stand-in captain during the recently concluded Asia Cup in Kohli's absence, also couldn't escape the overwhelming love of his die-hard fans.

During the recently held Vijay Hazare Trophy game between Mumbai and Bihar, which Mumbai won by nine wickets, a fan jumped onto the field and ran to the pitch to plant a kiss on Rohit Sharma's cheeks.

A video of this was shared by a Twitter user and is on the verge of breaking the Internet. Going by what meets the eye, the helmet dutifully protected Sharma from this unforeseeable bouncer.

Rohit Sharma Aakash Chopra Cricket
Get the latest Cricket news, check out the India cricket schedule, Cricket live score . Like us on Facebook or follow us on Twitter for more sports updates. You can also download the NDTV Cricket app for Android or iOS.