England's Jade Dernbach will miss the remainder of the one-day series against Australia because of a side strain, it was announced on Monday. 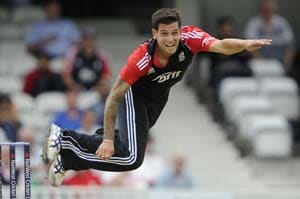 England's Jade Dernbach will miss the remainder of the one-day series against Australia because of a side strain, it was announced on Monday.

The Surrey seamer injured himself in Sunday's second match of five, on his home ground of The Oval, where a six-wicket win gave England a 2-0 lead.

Dernbach was already due to miss Wednesday's third one-day international against Australia at Edgbaston on compassionate grounds.

He and fellow England squad member Stuart Meaker are due to attend Wednesday the funeral of their former Surrey team-mate Tom Maynard, who died at the age of 23 in an incident on a London Undeground train line last month.

Earlier on Monday, Warwickshire seamer Chris Woakes was called up to cover the absences of Meaker and Dernbach.

First-choice fast bowler James Anderson missed Sunday's match with a groin injury, and his participation in the rest of the series remains uncertain.

The England and Wales Cricket Board confirmed Dernbach's side injury in a statement issued Monday that also said: "A rehabilitation and recovery programme will be established alongside Surrey CCC in the coming days following further medical assessment."

England plan to announce a replacement for Dernbach after Wednesday's match in Birmingham.

Before Sunday's match at the Oval, teenage Australia fast bowler Pat Cummins was ruled out of the remainder of the series with a side strain.

Comments
Topics mentioned in this article
Cricket Australia Cricket Team Jade Dernbach England Cricket Team West Indies Cricket Team
Get the latest Cricket news, check out the India cricket schedule, Cricket live score . Like us on Facebook or follow us on Twitter for more sports updates. You can also download the NDTV Cricket app for Android or iOS.