Watch: Henry Nicholls Gets Out In Bizarre Fashion Off Jack Leach After Hitting Non-Striker's Bat

On the stroke of tea, Nicholls, who struggled to 19 off 99 balls, drove powerfully at left-arm spinner Jack Leach. The ball deflected off non-striker Daryl Mitchell's bat and then looped gently to Alex Lees 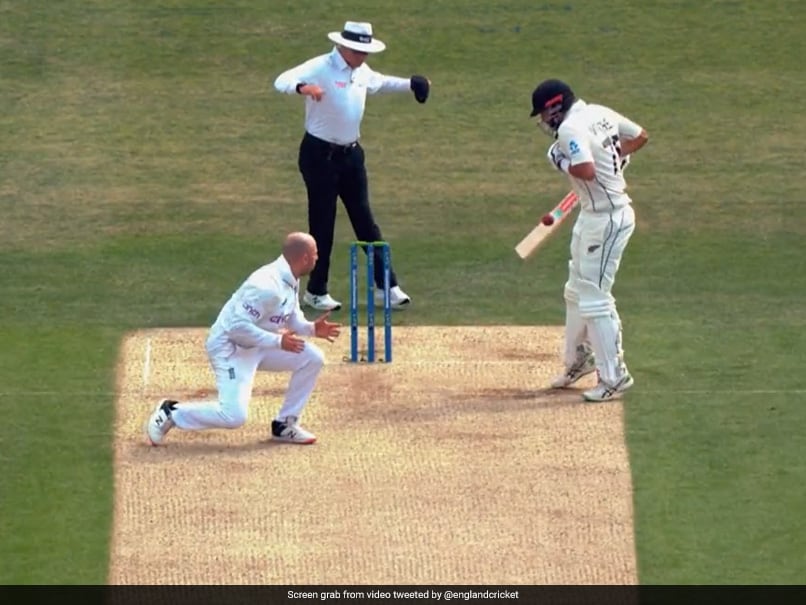 Stuart Broad led England's attack in the absence of James Anderson before New Zealand lost Henry Nicholls in bizarre fashion on the opening day of the third Test at Headingley on Thursday. New Zealand were 123 for five at tea, with Broad removing Tom Latham in the first over of the match prior to capturing the key wicket of New Zealand captain Kane Williamson.

On the stroke of tea, Nicholls, who struggled to 19 off 99 balls, drove powerfully at left-arm spinner Jack Leach. The ball deflected off non-striker Daryl Mitchell's bat and then looped gently to Alex Lees at mid-off for an unlucky dismissal.

England, who have an unassailable 2-0 lead, lost the toss under blue skies and on a seemingly good batting pitch. The hosts were looking to make it three wins out of three under their new leadership duo of captain Ben Stokes and Test coach Brendon McCullum, a former New Zealand skipper.

They were without Anderson, their all-time leading Test wicket-taker, because of an ankle injury. But Anderson's longtime new-ball partner Broad made up for his absence by removing Tom Latham for a sixth-ball duck after he edged a delivery straight to Joe Root at first slip.

Broad also dismissed star batter Kane Williamson, whose fluent 31 had included five fours, when the star batsman edged a fine leg-cutter to wicketkeeper Ben Foakes as the seamer took his 548th Test wicket. Williamson, in a rare show of emotion, ripped off his glove in disgust.

Kane Williamson
Get the latest updates on IPL Auction 2023 and check out  IPL 2023 and Live Cricket Score. Like us on Facebook or follow us on Twitter for more sports updates. You can also download the NDTV Cricket app for Android or iOS.