England vs Ireland: England Sent Packing For 85 By Ireland In One-Off Test

The Ireland fast bowlers ran through the English batting as the hosts were sent packing in less than one session. 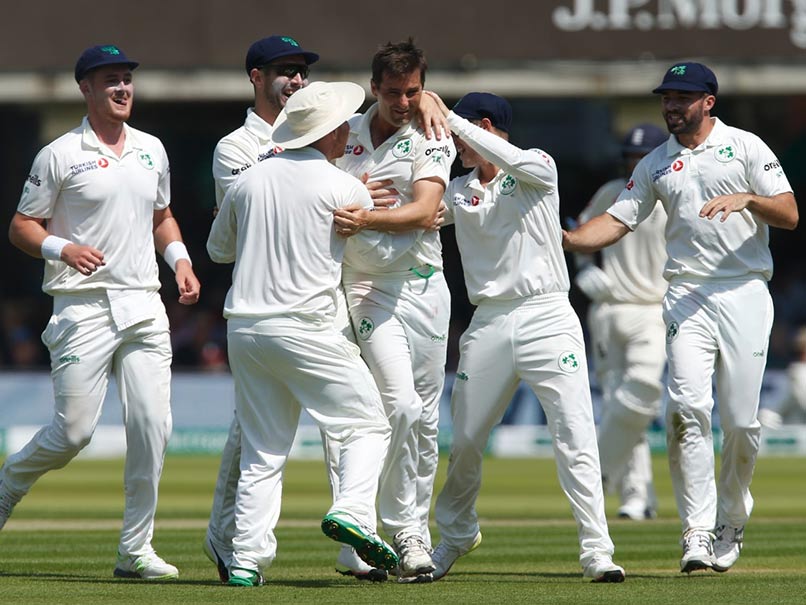 Tim Murtagh finished the first innings with figures of five for 13 in nine overs.© AFP

England were stunned by Ireland on Wednesday at Lord's in the one-off Test as the hosts were bowled out for a mere 85 after winning the toss and electing to bat. Tim Murtagh starred with the ball for Ireland and finished with figures of 5/13 in nine overs on the first day of the Test match. Joe Denly, Sam Curran and Olly Stone were the only players who managed to reach double-digit scores. Jason Roy, who was the star for England in their World Cup 2019 triumph, had a horrendous start to his Test career as he was dismissed in the third over of the match for just five runs.

The 37-year-old Murtagh, who plays at the same ground for Middlesex, had the sensational figures of five wickets for 13 runs in nine overs after England captain Joe Root had won the toss.

On a ground wherethey won the World Cup just over a week ago, England were in deep trouble despite Root's insistence they did not want to "sleepwalk" into the match ahead of the Ashes series, starting next week.

A green-tinged pitch promised to offer Ireland's quicks some assistance but few could have foreseen the flurry of England wickets that followed, with Jonny Bairstow, Moeen Ali and Chris Woakes all out for nought on a sunny day.

Test debutant Jason Roy, the latest batsman to be given a chance at filling England's problem position of opener, had made just five when he might have been lbw to Test debutant Mark Adair, only for a no-ball to be called by the umpires.

But five was all the World Cup-winner made, with Murtagh squaring Roy up before the Surrey batsman edged a low catch to Paul Stirling at first slip.

Joe Denly (23) offered a degree of resistance before he became Adair's maiden Test wicket, lbw going across his stumps.

Adair then captured the prize wicket of Root, plumb lbw for two to a ball that would have hit middle stump, although Ireland had to first review umpire Aleem Dar's original not out decision.

The cascade of wickets continued as 42-4 quickly became 42-5, with Jonny Bairstow bowled for a duck off an inside edge by Murtagh as he attempted a booming drive in a desperate bid to hit England out of trouble.

Woakes then became Murtagh's fourth victim, lbw on umpire's call before the veteran seamer ensured he would have a place on the honours board for all those who take five wickets in a Test innings at Lord's when he had Moeen caught behind, with England seven down inside 15 overs.

This one-off match was only scheduled for four days, rather than the traditional five.

Jason Roy Cricket
Get the latest updates on ICC T20 Worldcup 2022, check out the Schedule and Live Score. Like us on Facebook or follow us on Twitter for more sports updates. You can also download the NDTV Cricket app for Android or iOS.