Michael Holding Condemns England And Australia For Not Taking A Knee 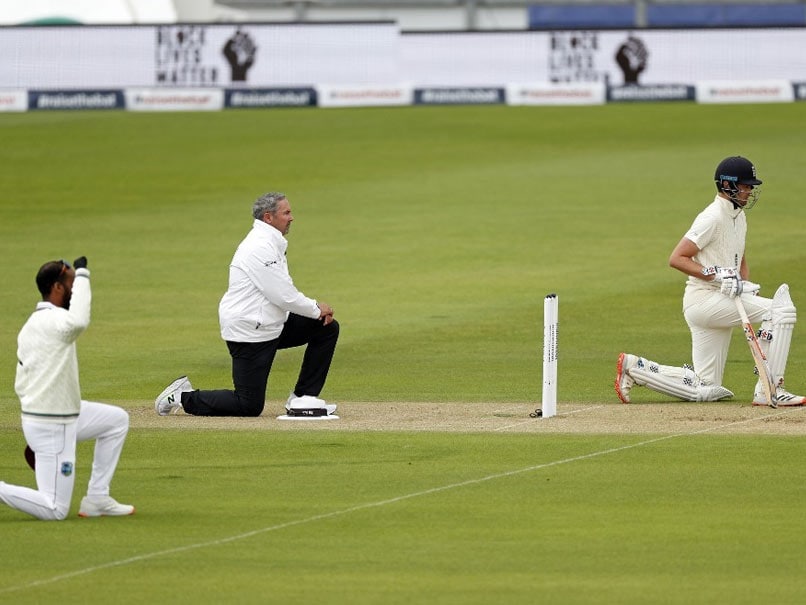 England and West Indies players took a knee at the start of each of their three Tests in July.© AFP

West Indies great Michael Holding has criticised England and Australia for opting not to take a knee in support of the campaign to fight racial injustice, accusing them of making "lame" excuses. Holding, who played in the great West Indian sides of the 1970s and 1980s, in July recalled ugly incidents he experienced as a young cricketer on his visits to Australia and England. The former paceman spoke about how meaningful change was needed following the death of George Floyd in police custody in the United States, which sparked a wave of protests across the globe.

England and West Indies cricketers took a kneeat the start of each of their three Tests in July.

England and Australia are playing each other in a three-match ODI series starting at Old Trafford on Friday.

"I'm a little bit disappointed that since the England-Ireland series, when they did take a knee, I haven't seen any of the teams take a knee," Holding said on his YouTube channel.

"Now that the West Indies team has gone home, that doesn't mean that you still shouldn't be respecting the message and exactly what it stands for."

Holding accused the England and Wales Cricket Board (ECB) and Australia captain Aaron Finch of making "lame" statements over ending the practice at a time when many other sports teams remain committed to it.

Finch said after raising the matter with England skipper Eoin Morgan, his team would not take the knee, adding that "the education around it is more important than the protest".

But Holding said: "So for Pakistan and England not to then take that signal -- because you are not doing anything other than going down on one knee -- you are not chanting anything, you are not saying anything, all you are doing is making a signal to keep the awareness going.

"Neither team did it and the ECB came out with a pretty lame statement, as far as I am concerned."

The ECB, in response to Holding's comments, said many teams, both domestically and internationally, had taken the knee.

"Our refreshed inclusion and diversity strategy, published at the start of the West Indies series, commits to several comprehensive initiatives that focus on eliminating discrimination from all areas of cricket," it said.

"England's men's and women's players all remain committed to using their reach and influence to keep promoting inclusion and diversity in perpetuity, for the betterment of cricket and sport."