England selectors left Jason Roy and Jonny Bairstow out from the 15-man Test squad after they failed terribly in the just-concluded Ashes series. 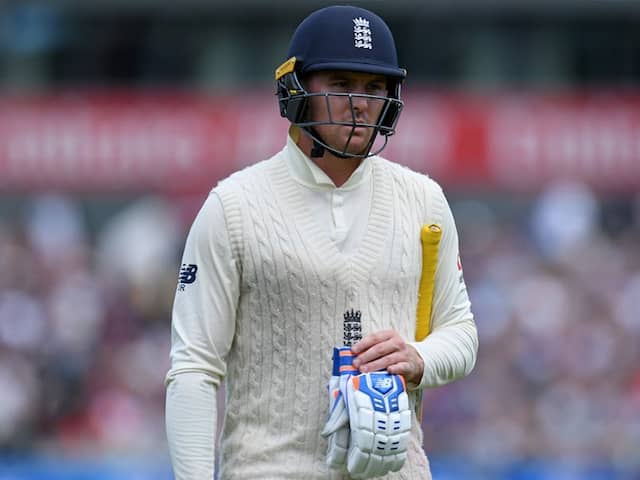 Jason Roy failed in the Ashes 2019 both as an opener and also in the middle order.© AFP

England and Wales Cricket Board (ECB) on Monday announced the 15-strong squads for the five Twenty20 Internationals (T20Is) and two Test matches against New Zealand. England's limited-overs skipper Eoin Morgan will lead the side for the first time after the World Cup triumph. England selectors dropped Jason Roy and wicket-keeper Jonny Bairstow from the Test squad after they failed terribly in the just-concluded Ashes series which ended in a 2-2 draw. Jason Roy was not even included in the fifth Ashes Test.

The selectors took note of Tom Banton and Saqib Mahmood's performance in the white-ball cricket in the domestic competition and included them in the national squad for the first time.

Somerset's Banton earned the reward for finishing second in the leading run-scorers' list with 594 runs in the just-concluded Vitality Blast, while Mahmood reaped reward for picking up most wickets in the Royal London One-Day Cup.

The two-Test series which is not part of ICC World Test Championship will start on November 21 and England have included Dominic Sibley, Zak Crawley, Saqib Mahmood and Matt Parkinson into their 15-member squad.

England's all-time leading wicket-taker in Test cricket James Anderson missed out on a place in the squad due to injury which he suffered during the first Ashes Test in Birmingham where he could only ball four overs.

"James Anderson was unavailable for selection in the Test squad as he continues his rehabilitation from a calf injury," the release said.

The tour will be begin with a T20I match on November 1 in Christchurch. The rest of four T20I matches will be played on November 3, 5, 8 and 10 in Wellington, Nelson, Napier and Auckland, respectively.

The Test series will begin on November 21 at Bay Oval, Mt Maunganui, while the second match will be played at Seddon Park, Hamilton from November 29 to December 3.

Jonny Bairstow Cricket
Get the latest Cricket news, check out the India cricket schedule, Cricket live score . Like us on Facebook or follow us on Twitter for more sports updates. You can also download the NDTV Cricket app for Android or iOS.