No side have made more in the fourth innings to win an Old Trafford Test than England's 294/4 against New Zealand in 2008. 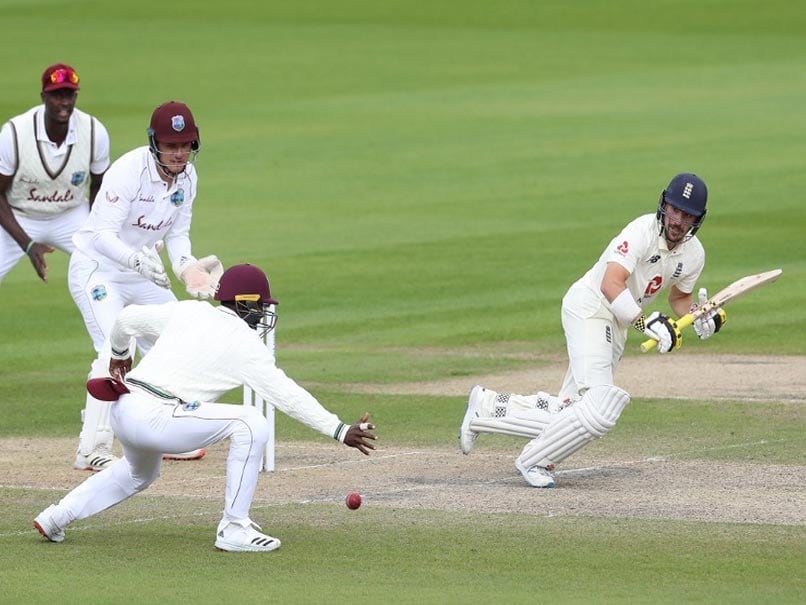 Stuart Broad took six wickets before Rory Burns' 90 strengthened England's grip on the deciding third Test despite the West Indies avoiding the follow-on at Old Trafford on Sunday. Broad's haul of 6-31 in 14 overs helped the hosts bundle out the West Indies for 197 in reply to England's first-innings 369 that featured his dashing 62. He took all the West Indies wickets to fall on Sunday's third day in a burst of 4-14 in four overs as England went in search of a victory that would see them win this series 2-1 and regain the Wisden Trophy.

England then made 226-2 declared in their second innings, with Burns and Dom Sibley (56) sharing a stand of 114 - England's first century opening partnership in a home Test since Alastair Cook and Alex Hales put on 126 against Pakistan at Edgbaston in 2016.

England captain Joe Root was 68 not out when he declared, amid concerns Monday's play could be washed out, to set the West Indies a huge target of 399.

No side have made more in the fourth innings to win an Old Trafford Test than England's 294-4 against New Zealand in 2008.

Root had previously completed a 49-ball fifty when he drove Kemar Roach's first ball back straight over the fast bowler's head for four.

West Indies used three wicketkeepers on Sunday after Shane Dowrich was hit in the face after a 90mph delivery from Shannon Gabriel burst through his gloves.

One-day international wicketkeeper Shai Hope, in the Test side as a batsman, initially took over behind the stumps.

But match officials then allowed Da Silva, the back-up gloveman in the Test squad but not in the original XI for this match, to come on.

Burns, twice dismissed by Chase already this series, almost fell to him on 12 when beaten by a sharply turning delivery, only for the unlucky Da Silva to slip and miss the stumping chance.

Root, perhaps remembering how Dowrich, not out overnight along with West Indies captain Jason Holder, had struggled against the short ball in the second Test, initially deployed Jofra Archer and Chris Woakes on Sunday.

But Dowrich made a useful 37 before he was last man out to give Broad his 497th Test wicket.

Woakes thought he had Holder out on 38 with the aid of a brilliant diving catch by Ollie Pope at midwicket, but a replay check by the umpires revealed a no-ball.

Holder then ensured the follow-on was avoided by pulling Woakes for four.

But Holder was lbw to Broad, bowling a fuller length than Archer or Woakes, for 46.

Broad, controversially omitted from England's first-Test loss at Southampton, had Roach caught by first slip Root for a duck and Rahkeem Cornwall lbw for 10.

The only seamers to have taken more Test wickets than Broad are his longtime England new-ball colleague James Anderson (589) and the retired pair of Australia's Glenn McGrath (563) and the West Indies' Courtney Walsh (519).