Stuart Broad smashed 62 off just 45 balls to help England post 369 on Day 2 of the third and final Test against the West Indies in Manchester. 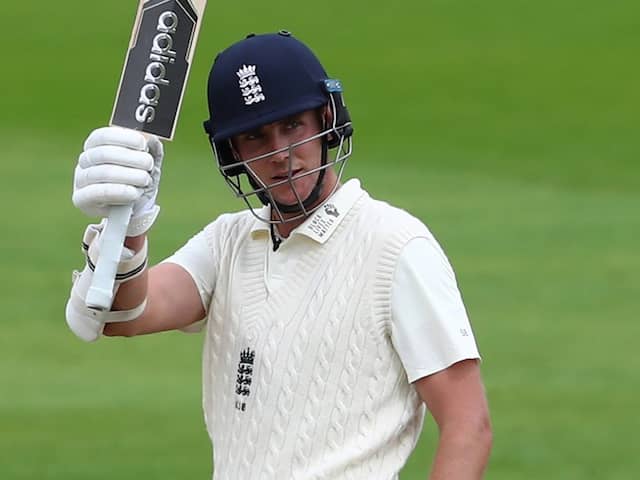 Stuart Broad made a key contribution with the bat to put England in charge of the 3rd Test.© AFP

England pacer Stuart Broad has revealed that he took inspiration from Shane Warne in order to improve his batting in Tests. His remarks came as Broad smashed the joint third-fastest fifty in Test cricket for England. Broad went on to play a knock of 62 runs against the West Indies in the first innings of the third Test being played at Old Trafford in Manchester. "Tactically it was the right thing to do and something I've worked on with Peter Moores at Nottinghamshire. He brought me the example of Shane Warne who didn't look particularly pretty at times but hit balls in different areas and was really effective, especially in the 2005 Ashes," cricket.com.au quoted Broad as saying.

"Quite unorthodox, opening up different parts of the field; I looked at that, did a bit of research as to how he went about it, and decided it was a good way for me to go - opening up the offside," he added.

Broad had come out to the middle with England in a spot of bother at 280 for eight, but his knock allowed the hosts to end up with 369.

"It felt pretty comfortable, having a clear game plan of what to do. Batting is such a frustrating, weird thing. If you'd have told me this morning I'd get 10, I'd be pretty happy, and then you end up getting 60 and start kicking the ground that you've not got 70," Broad said.

"There was a little bit of thought process in the madness, but I did enjoy myself out there," he added.

With the ball in hand, Broad took two wickets and as a result, the West Indies ended day two at 137/6.

Along with Broad, James Anderson also picked up two wickets while Jofra Archer and Chris Woakes took a wicket apiece.

If England manage to win the ongoing Test, then they will regain the Wisden Trophy.

On the other hand, if the West Indies end up winning or drawing this match, they will retain the Wisden Trophy.

Stuart Broad Shane Warne England vs West Indies, 3rd Test Cricket
Get the latest updates on IPL 2020, check out the IPL Schedule for 2020 and Indian Premier League (IPL) Cricket live score . Like us on Facebook or follow us on Twitter for more sports updates. You can also download the NDTV Cricket app for Android or iOS.