India B bowled tightly to restrict India C to 232/9 after scoring 283/7 in their effort. 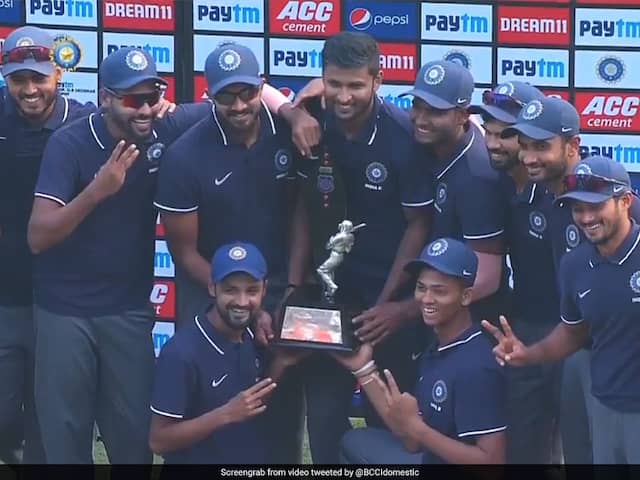 Shahbaz Nadeem claimed four wickets following an impressive knock of 86 runs by Kedar Jadhav to help India B beat India C to clinch Deodhar Trophy at the JSCA International Stadium Complex in Ranchi on Monday. After opting to bat, India B lost their opener Ruturaj Gaikwad for a duck in the first over by Ishan Porel. Fast bowler Porel later went on to claim a five-wicket haul for India C and restricted India B to 283/7 in their allotted 50 overs. All-rounder Kedar Jadhav top-scored with 86 runs off 94 balls, including four boundaries and as many sixes. Yashasvi Jaiswal scored a causative 54, while Vijay Shankar made 45 runs off 33 balls. Krishnappa Gowtham delighted the Ranchi spectators with three boundaries and as many sixes in his quickfire 10-ball 35. However, India C failed to chase the score and were restricted to 232/9 in their 50 overs.

Besides Porel's five-wicket haul, Jalaj Saxena and Axar Patel chipped in with a wicket each for India C.

While chasing, India C lost their skipper Shubman Gill for one run in second over. However, Gill broke Virat Kohli's 10-year old record.

The 20-year-old batsman became the youngest-known captain to lead a side in the finals of Deodhar Trophy. India captain Kohli had captained North Zone in the final back in the 2009-10 season at the age of 21.

Priyam Garg impressed with the willow and scored 74 runs off 77 balls, including eight boundaries and a six.

Axar Patel was run out for 38 while Jalaj Saxena remained unbeaten on 37 as India C were restricted to 232/9 in their chase of 284.

While Nadeem led the bowling attack for India B with four wickets, Mohammed Siraj struck twice and Roosh Kalaria claimed a single wicket.