Dinesh Karthik took a brilliant catch behind the stumps to send Parthiv Patel packing in Deodhar Trophy final in Ranchi. 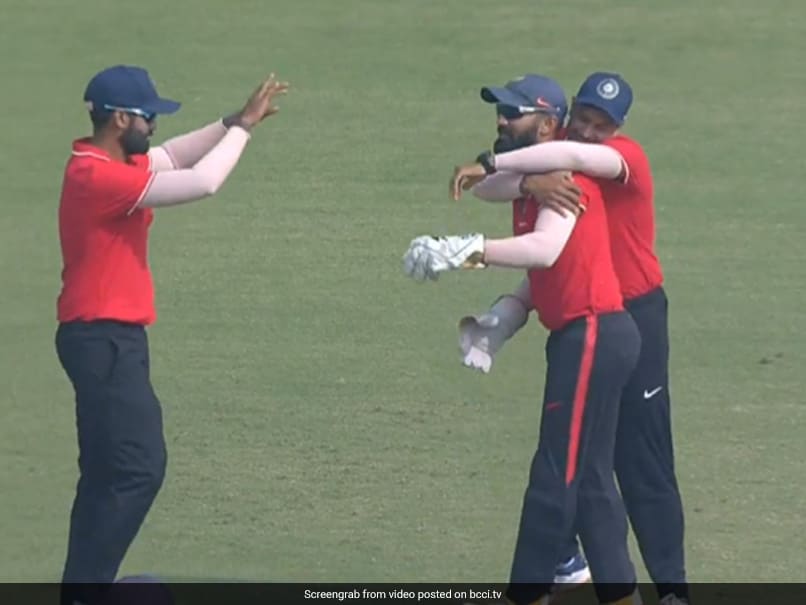 Dinesh Karthik, who is playing for India C in the Deodhar Trophy, took a stunning one-handed catch while diving to his left to send India B skipper Parthiv Patel back to the pavilion on Monday. In the ninth over, Ishan Porel bowled a good length delivery that took the outside edge of Parthiv Patel's bat and went into the hands of Dinesh Karthik.

Karthik's stunning catch was appreciated by fans on Twitter.

"And people call him over aged..his time is over..he is 34...but the truth is that still he can fly like a bird like in 2007 where he took the stunner to dismiss smith... @DineshKarthik take a bow," a fan tweeted.

And people call him ovwr aged..his time is over..he is 34...but the truth is that still he can fly like a bird like in 2007 where he took the stunner to dismiss smith... @DineshKarthik take a bow pic.twitter.com/a3cE8AanyN

India B were off to a poor start as they lost both their openers inside the first 10 overs.

Ishan Porel, who accounted for both the openers, picked up his second five-wicket haul in List A cricket. Apart from the 21-year-old fast-bowler, Jalaj Saxena and Axar Patel picked up a wicket each.

For India B teenager, Yashasvi Jaiswal and Kedar Jadhav scored half-centuries while Vijay Shankar also chipped in with a quick knock of 45 off 33 balls.

All-rounder Krishnappa Gowtham played a cameo of 35 runs off just 10 deliveries towards the fag end of the innings to lift his side to a fighting total of 283 for seven in 50 overs.

Parthiv Patel Cricket
Get the latest updates on ICC T20 Worldcup 2022 and CWG 2022 check out the Schedule, Live Score and Medals Tally. Like us on Facebook or follow us on Twitter for more sports updates. You can also download the NDTV Cricket app for Android or iOS.