Deepak Chahar Picks Up Another T20 Triple In Three Days

Deepak Chahar once again weaved magic with the ball picking up yet another T20 triple in three days' time. 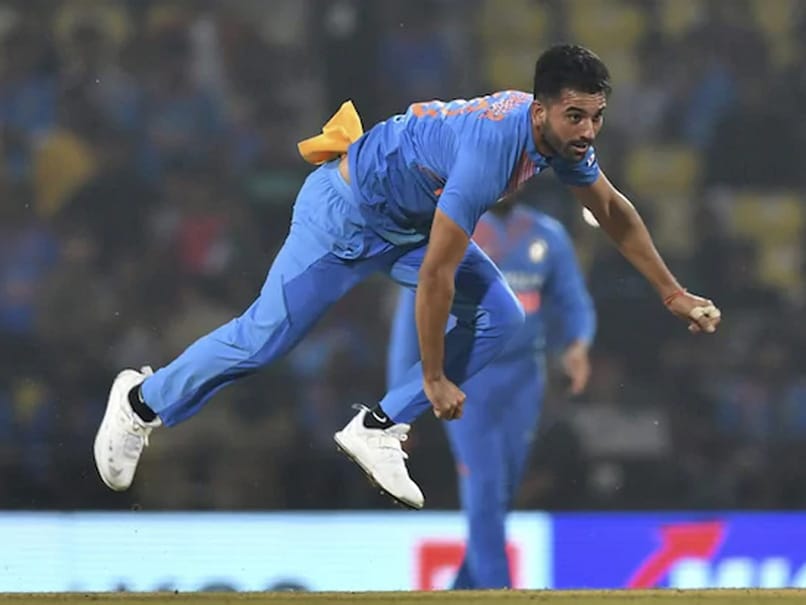 Deepak Chahar, who fired India to an emphatic T20 series win with his six-wicket haul, once again weaved magic with the ball picking up yet another T20 triple in three days' time. However, unlike last time his current heroics came for Rajasthan when he dismissed three Vidarbha batsmen off three legal deliveries in a domestic match in the ongoing Syed Mushtaq Ali Trophy at Greenfield International Stadium, Thiruvananthapuram on Tuesday. Leading his side's pace attack, the 27-year-old bowler removed Vidarbha's Darshan Nalkande, Shrikant Wagh and Akshay Wadkar off successive legal deliveries in the 13th over. He finished with the figures of 4/18 in his three overs and helped restrict Vidarbha to 99/9 in a 13 over-match.

Deepak Chahar bowling the final over of the innings dismissed four batsmen. He removed Rushabh Rathod on the very first ball of the over and then dismissed Nalkande on the fourth ball in the same over. The next delivery he bowled was a wide but he dismissed Wagh and Wadkar off the last two balls of the over to complete his yet another T20 triple.

Deepak Chahar, on Sunday, had become the second Indian to claim a T20I hat-trick and returned with six for seven in the third and the final T20I match, which India won by 30 runs in Nagpur.

He had also registered the best-ever T20I figures in men's cricket as he went past Ajantha Mendis, who had taken six wickets for eight runs against Zimbabwe.

Deepak Chahar removed Shafiul Islam on the final delivery of the 18th over and then struck twice in the final over to remove Mustafizur Rahman and Aminul Islam to complete his hat-trick.

Chahar's stand-out performance helped India clinch the series coming from behind after they had lost the series opener in New Delhi.

When Rajasthan came out to bat, they were given a revised target of 107 runs from 13 overs. Their openers Manender Singh and Ankit Lamba got them off to a flying start as they added 58 runs in first four overs. Manender scored a quick-fire 44 off just 17 balls, with the help of six maximums, while Lamba could only manage 15 runs from 11 balls.

Rajasthan lost both their openers in the fifth over and could never recover after that as they kept losing wickets at regular intervals.

In the end, Rajasthan could only score 105/8 in 13 overs, falling one run short of the target. Akshay Wakhare starred with the ball for Vidarbha, picking up three for 15 in three overs.

India Cricket Team Deepak Chahar Cricket
Get the latest updates on ICC Women's Cricket World Cup 2022 and IPL 2022, check out the Schedule , Live Score and IPL Points Table. Like us on Facebook or follow us on Twitter for more sports updates. You can also download the NDTV Cricket app for Android or iOS.